Home > Back to Search Results > Battle of Alamance... Much on the Regulators of North Carolina...
Click image to enlarge 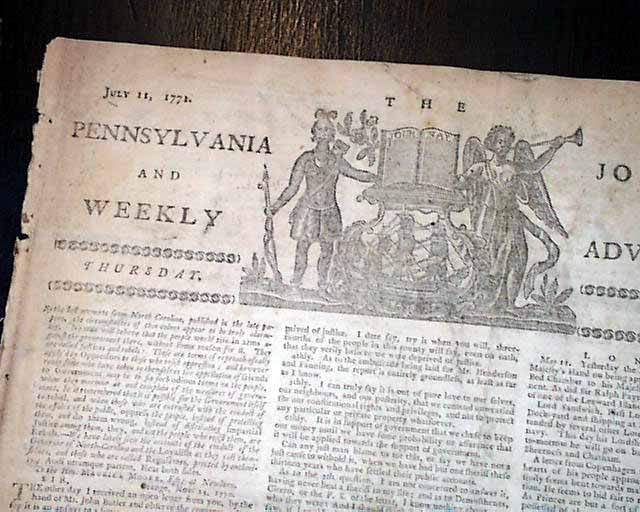 Battle of Alamance... Much on the Regulators of North Carolina...

* Battle of Alamance
* War of the Regulation
* Colonial North Carolina

This newspaper features one of the larger & more decorative masthead engravings to be found in a colonial America newspaper.
A terrific issue on the trouble with the Regulators of North Carolina, as more than half of the ftpg. is taken up with a fine letter signed by: James Hunter, the leader of the outlaws in which he states the reason for their rebellion against the governor..
The Regulators were a large group of North Carolina colonists who opposed the taxation and fee system imposed by colonial officials in the late 1760s. This political argument led to a battle between the colonial militia and the Regulators in 1771.
The letter is prefaced with a nice note reading in part: "...the circumstances of that colony appear to be truly alarming. No man will believe that the people would rise in arms against the government there without some reason for it..." with more (see).
Page 3 is mostly taken up with much more fine content on the Regulators, too much to list here but the photos show the text. Of significance is a great letter: "Relation of the Battle at Alamance, on Thursday, May 16" which includes the list of killed & wounded. This battle was the final battle of the War of the Regulation.
Four pages, some staining to the bottom of the front page not affecting noted content, foxing at the spine, minor damp staining inside.