Home > Back to Search Results > Dealing with the Regulators of North Carolina...
Click image to enlarge 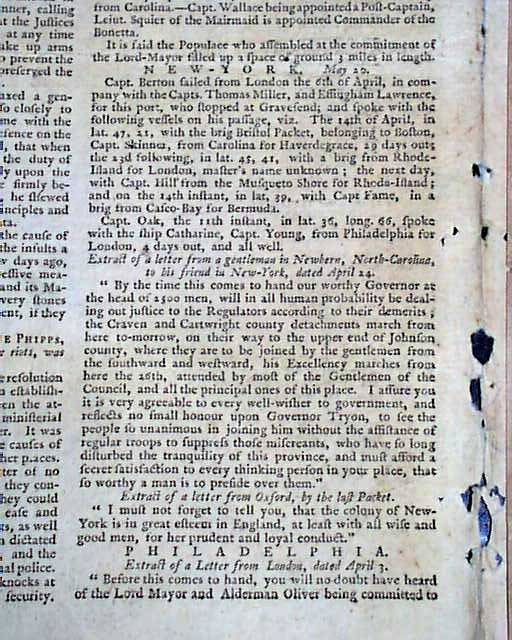 Dealing with the Regulators of North Carolina...


THE PENNSYLVANIA JOURNAL & THE WEEKLY ADVERTISER, Philadelphia, May 23, 1771  This newspaper features one of the larger & more decorative masthead engravings to be found in a colonial America newspaper.
Page 2 has a report from Boston on the election of representatives, they being James Otis, Thomas Cushing, Sauel Adams, and John Hancock. Also a letter from North Carolina noting: "...our worthy Governor at the head of 2500 men will in all human probability be dealing out justice to the Regulators according to their demerits..." with more. The Regulators were a large group of North Carolina colonists who opposed the taxation and fee system imposed by colonial officials in the late 1760s. This political argument led to a battle between the colonial militia and the Regulators in 1771.
Pg. 3 has more on the Regulators with: "...hear from N. Carolina that the Regulators in the back counties, to the amount of 5000, are determined to meet the governor & militia who are going out to quell them..." with more on this.
Included is a single sheet broadside "Postscript" with additional news reports. Blank on the reverse.
Six pages in total, some foxing to the Postscript, generally nice condition.