Home > Back to Search Results > Working towards the Maryland Jew Bill...
Click image to enlarge 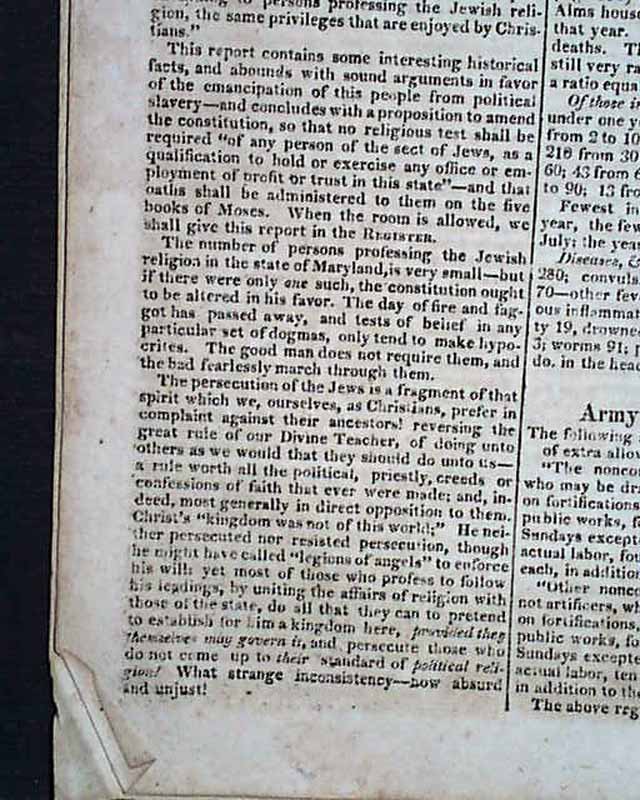 Working towards the Maryland Jew Bill...


NILES' WEEKLY REGISTER, Baltimore, Jan. 16, 1819  Under: "Rights of Conscience" is a report which ultimately led to the historic Maryland Jew Bill. Bits include: "...from...delegates of the state of Maryland appointed to consider the justice & expediency of extending to persons professing the Jewish religion, the same privileges that are enjoyed by Christians. This report contains some interesting historical facts & abounds with sound arguments in favor of the emancipation of this people from political slavery...a proposition to amend the constitution so that no religious test shall be required of any person of the sect of Jews, as a qualification to hold or exercise any office or employment of profit or trust in this state...The number of person professing the Jewish religion in the state of Maryland is very small...The persecution of the Jews is a fragment of that spirit..." and much more (see).
Also in this issue is; "Treaty with Sweden - By the President of the United States - A Proclamation" taking 3 pages & signed in type: James Monroe & John Quincy Adams.
Complete in 16 pages, measures 6 1/4 by 9 1/2 inches, in very good condition.