Home > Back to Search Results > Letter from Beauregard... Battle of Oak Hill...
Click image to enlarge 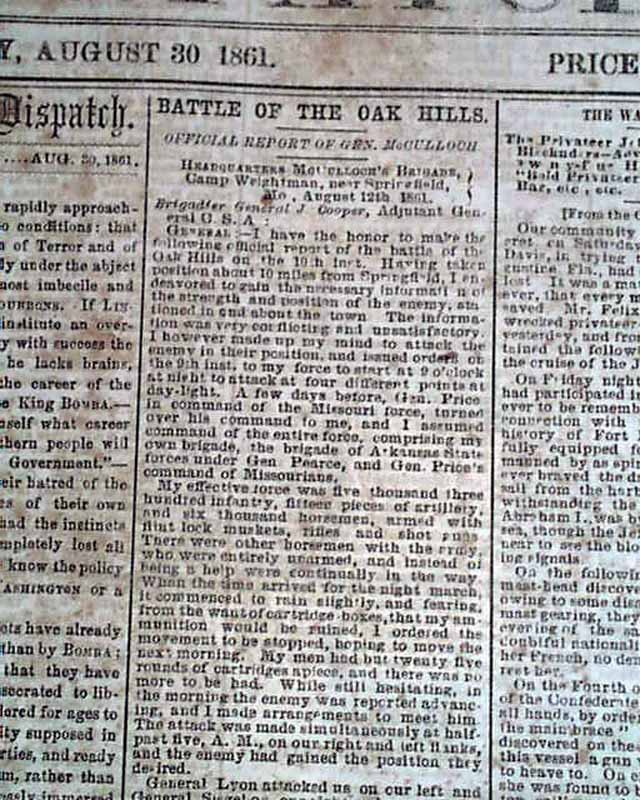 A nice newspaper from the capital of the Confederacy. Among the front page reports are those headed: "Battle of the Oak Hills--Official Report of Gen. McCulloch which takes an entire column and is signed by him in type; "The War On the Seas--The Privateer Jeff Davis--Escape from the Blockaders..." "The Body of the Late Col. Cameron--Correspondence with Gen. Beauregard" which includes a letter signed in type: G. T. Beauregard; plus more.
Good Civil War coverage continues inside with: "Col. Tyler of the Confederate Army" "Western Virginia Geography" "Bureau of Army Intelligence" "Arizona--Col. Baylor's Proclamation" "Signs of the Times" "The War--Federal Accounts--Affairs at Fortress Monroe..." which takes 2 1/2 columns; "Federal Telegrams" with many subheads; "From Norfolk" "The Skirmish Near New Madrid" and more.
Complete in 4 pages with a banner masthead, very nice condition.