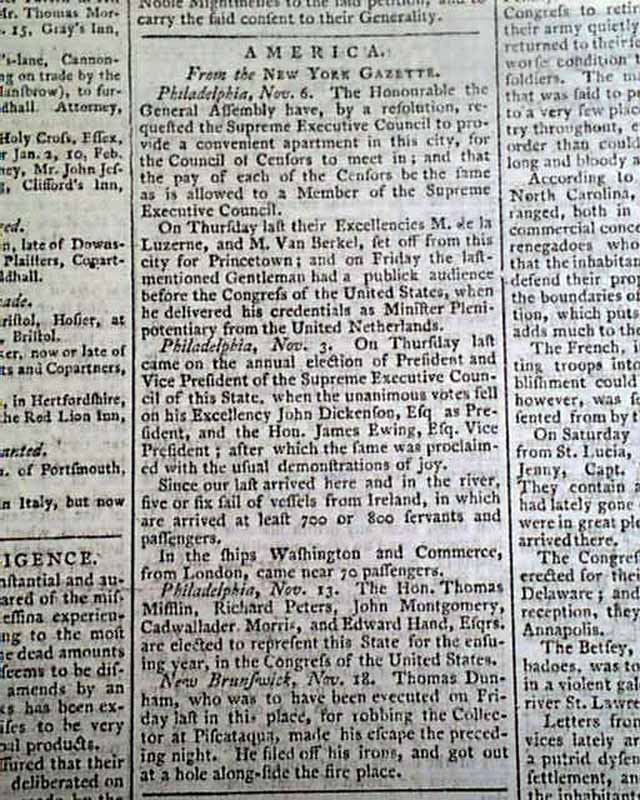 
THE LONDON CHRONICLE, England, Dec. 30, 1783  Page 2 has several reports headed: "America" including a report that John Dickinson was elected President of the Pennsylvania Assembly, & more. Also: "...Before she sailed all the King's troops and refugees had evacuated New York & the Americans had taken possession of the same...what with the number of people brought there by curiosity to see the place evacuated, and others to behold the celebration of the peace, the city appeared as full of inhabitants as when the troops were there...The remainder of theirs troops have been dismissed, almost naked, and without their arrears being paid to enable them to provide for their families..." and more. Further on: "...from Wilmington, in North Carolina, that province is totally deranged both in its civil capacity and also in its renegadoes who commit such depredations that the inhabitants have been obliged to arm to defend their property...". And also: "The Congress have ordered buildings to be erected for their meetings on the banks of the Delaware, and until they are ready for their reception, they are to meet at Princetown [Princeton] and Annapolis."
Eight pages, 8 1/4 by 11 1/4 inches, very nice condition.