Home > Back to Search Results > Washington traveling to France? Vermont wants to be a state...
Click image to enlarge 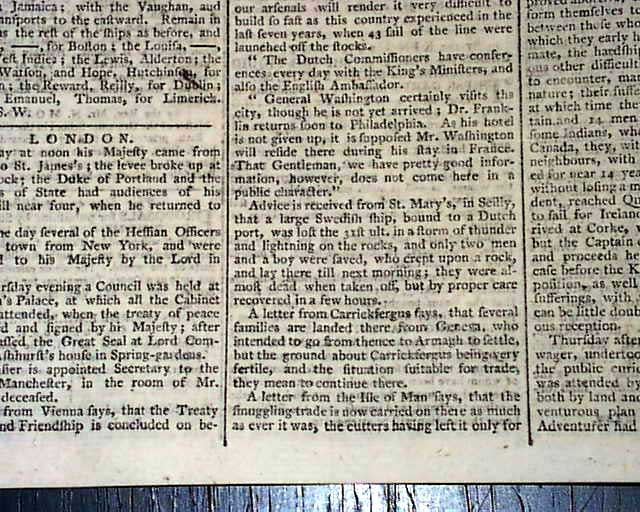 Washington traveling to France? Vermont wants to be a state...

Page 4 has a brief item from Paris: "General Washington certainly visits this city, though he is not yet arrived; Dr. Franklin returns soon to Philadelphia. As his hotel is not given up, it is supposed Mr. Washington will reside there during his stay in France...".
Half of page 7 has a document from the "state of Vermont" to the President of Congress concerning their admission to the Union. Vermont would join the Union in 1791 as the 14th state. Also: "Particular Instance of Gratitude in an Indian".
The back page has a report: "...that Congress had at last entered fully into the business of the Loyalists; ...the majority were decided in opinion to fulfill not only the letter of the Provisional Treaty with Great Britain in every point, but also its spirit by resolving that those unhappy persons, who being allured or misled by the machinations of British agents, took refuge or sought protection..." with more. And also a curious item from Princeton noting: "...that a disagreement prevail among the members of Congress on the subject of determining where the seat of government shall be established; and it is added that several of the members are warm advocates for meeting by rotation in each of the United States...".
Eight pages, 8 1/4 by 11 1/4 inches, very nice condition.