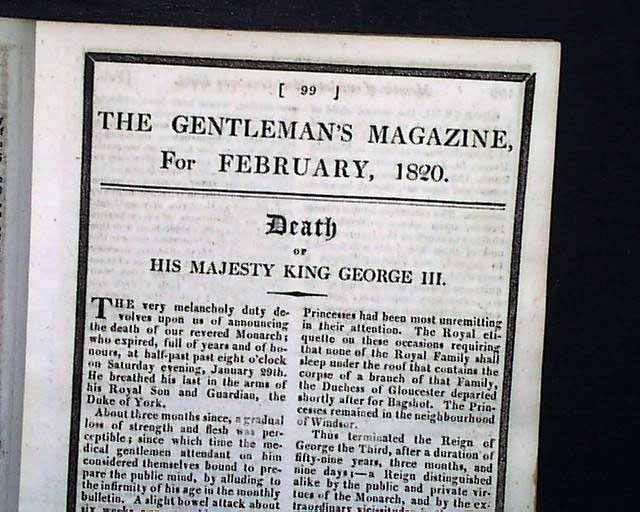 Item # 651047 THE GENTLEMAN'S MAGAZINE, London, February, 1820  This is a significant issue in British history, announcing the: "Death Of His Majesty King George III" as the very first article is headed, and which takes six pages of text each one with wide black mourning rules (see for portions).
Near the back of the issue is another set of pages with wide black mourning rules headed: "Obituary" "Funeral Of His Late Majesty King George III" which takes nearly six pages and includes on one page a great (and unusual) engraving of the King's coffin, with the order of the funeral procession (see photos for portions).
Another article is accompanied by an unusual halfpg. engraving headed: "Account of Mother Sawyer, the Witch of Edmonton".
Among the many other articles in the issue are:
*  "Description of St. Giles's Church, Oxford"
*  "Improvements in the British Coinage
*  "Letter from the Arctic Land Expedition"

Complete in 96 pages with the full title/index page. Measures 5 1/4 by 8 1/2 inches in very nice condition.