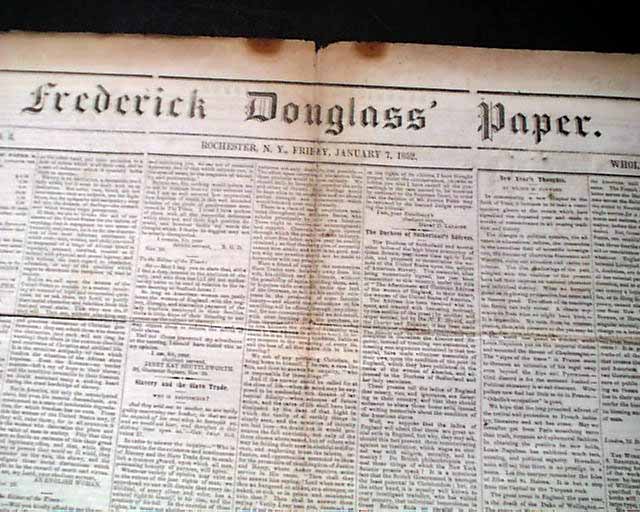 We are pleased to offer this exceedingly rare--and highly desirable--newspaper by the famed Frederick Douglass. This weekly title is the continuation of his newspaper "North Star" which began in 1847.
Douglass was perhaps the most famous 19th century African-American abolitionist who escaped from slavery and then risked his freedom by becoming an outspoken antislavery lecturer, writer, and publisher.
Among the various articles in this issue are those headed "Slavery In the United States" "Slavery & the Slave Trade" "The National Era & Slave Law" "Abolition In Russia" & more.
Much of page 2 is taken up with the speech of Joshua Giddings on: "Cuba Annexation--The Slave Question" and over half of the bkpg. is taken up with 2 chapters of: "Bleak House, by Charles Dickens".
Complete in four pages, never bound nor trimmed, several folds & creases, minor fold and edge wear, some foxing, a few discrete archival mends inside. There is a small piece from the lower spine touching a few letters on in inside pages, not affecting mentioned articles. Generally good condition.
A very fine and rare opportunity for one of the more sought-after titles of the 19th century.