Home > Back to Search Results > A college for African-Americans...
Click image to enlarge 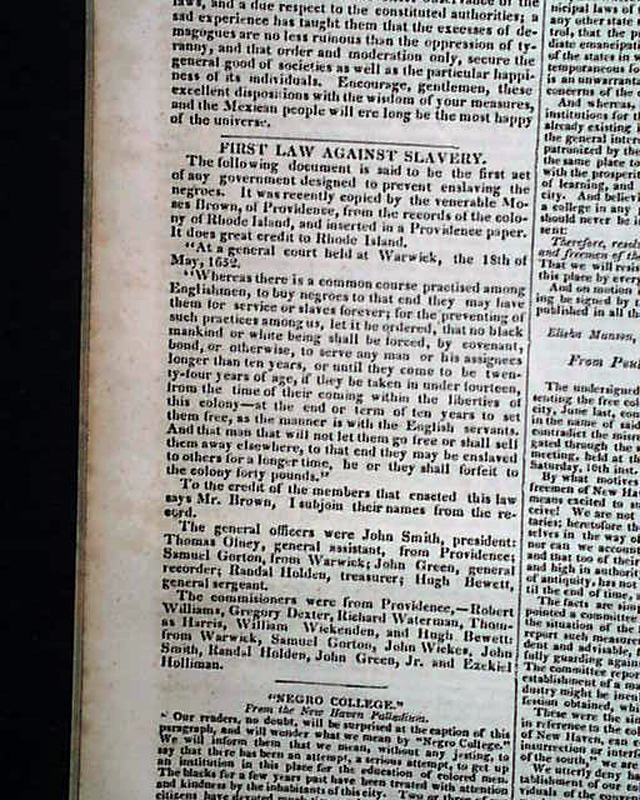 A college for African-Americans...


NILES' WEEKLY REGISTER, Baltimore, October 1, 1831  Within this issue is an interesting article headed: "Negro College" coming from New Haven,and the text beginning: "Our readers, no doubt, will be surprised at the caption of this paragraph & will wonder what we mean by 'Negro college'. We will inform them that we mean, without any jesting, to say that there has been an attempt...to get up an institution in this place for the education of colored men..." with much more.
The same page has an article headed: "First Law Against Slavery" with the text beginning: "The following document is said to be the first act of any government designed to prevent enslaving the negroes..." being a motion from Rhode Island.
Another article is headed: "National Anti-Masonic Convention" the text taking about 3 pages. (see photos for the beginning)
Among other reports in this issue are: "Appearance of a New Island in the Mediterranean" "Piracy" "Bank of the United States", a document signed in type: James Monroe; and "The Solar Phenomena".
Complete in 24 pages,  6 1/4 by 9 1/2 inches, very lite foxing,  nice condition.