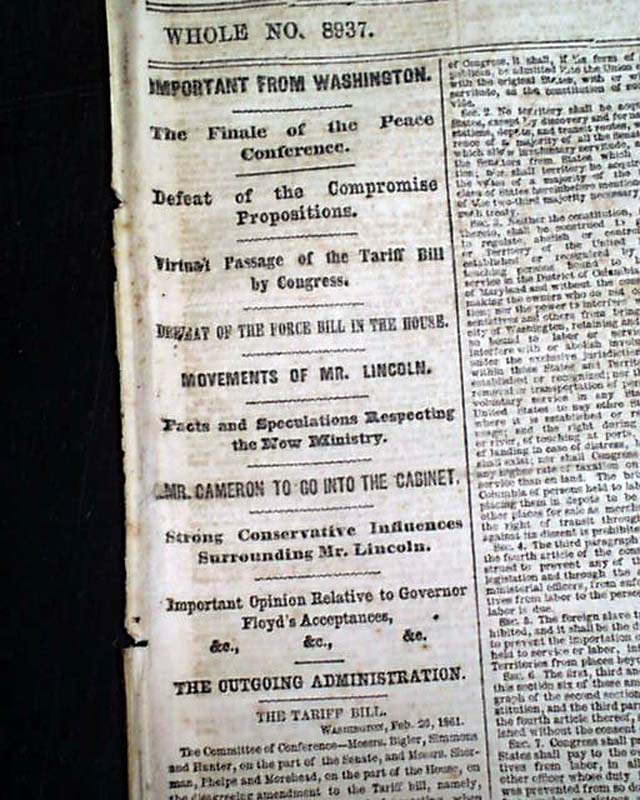 The front page reports the ominous events that would lead to the outbreak of the Civil War in less than two months. Also content on the incoming administration of Abraham Lincoln with first column headlines including: "The Finale of the Peace Conference", "Movements of Mr. Lincoln", "Facts & Speculations Respecting the New Ministry", "Mr. Cameron to Go Into the Cabinet", "Strong Conservative Influences Surrounding Mr. Lincoln", "The Outgoing Administration" and more.
Perhaps the most intriguing content is found on page 5, with one column heads: "HIGHLY IMPORTANT FROM ALBANY", "An Infernal Machine found under Lincoln's Seat at Cincinnati--A System of Custom House Examination on the Special Train--How the Baltimore Plot was Discovered, & the Parties Engaged in Ferreting it out--the Selfishness & Hypocrisy of the Republicans being Unmasked..."  and more (see).
The text of the above report includes in part: "...Every person who came upon the train was compelled to go through as rigid an examination as a person about to enter the dominion of the Russian Czar...Several other persons were subjected to like examination. The excuse given for all this was that on leaving Cincinnati a mysterious box was found under Mr. Lincoln's seat in the car which was found upon an examination to be a chemical preparation so combined as to explode at the proper time..." (see photos for portions).
This is an excellent account of Abraham Lincoln just weeks before he would be inaugurated as the 16th President of the United States.
This is the complete 8 page newspaper, a little close cut along the 1st column but no text loss, light toning near the top portion, generally nice.