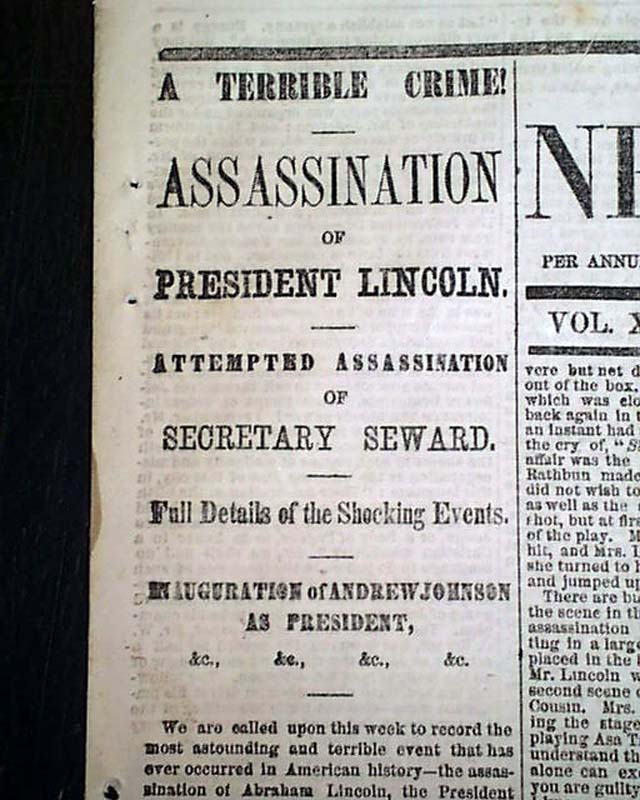 Being a weekly newspaper this is the first report of Lincoln's assassination with nice first column heads: "A TERRIBLE CRIME ! " "ASSASSINATION of PRESIDENT LINCOLN" "Attempted Assassination of Secretary Seward" "Full Details of the Shocking Events' "Inauguration of Andrew Johnson As President".  The entire front page is coverage of the details with many subheads including: "The Presidential Party For The Theatre Formed" "The Manner Of The Murder" "A Fuller and ore Correct Account" "Last Moments of  the President" "The Autopsy" and so much more.
All the specifics of the event are provided with much detail, coverage carrying over to page 4 as well where are details of: "The Funeral Solemnities" with an outline of the procession showing the hearse in the middle (see). Page 4 also has a nice, black-bordered editorial: "The Death Of The President" which is great reading and takes the entire first column.
Eight pages, rejoined at the spine, very nice condition. There is a small hole near the middle of the front leaf which affects 4 words but fortunately no critical text in the Lincoln coverage.