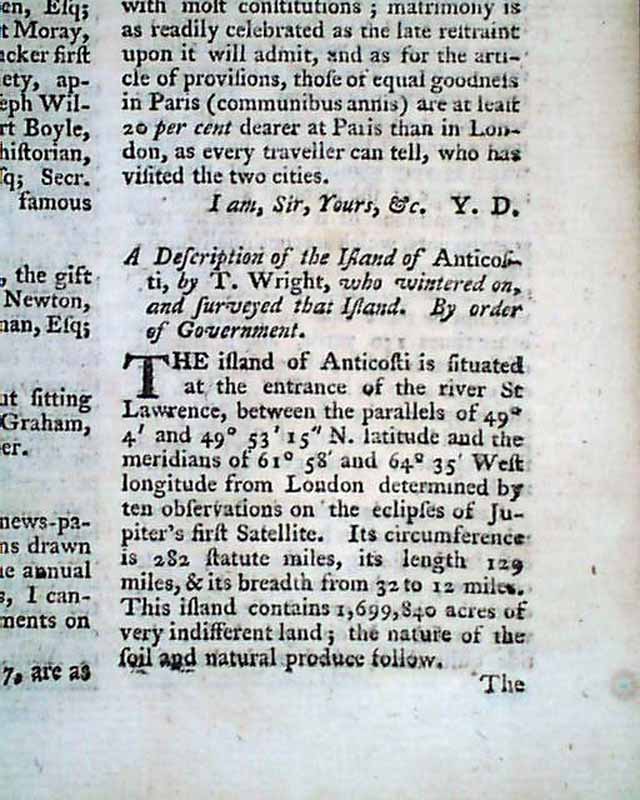 Within an article on "Ship News" is a report noting in part: "...A great number of our ships having been lately cast away on the coast of North America where there are many rocks & shoals not sufficiently known...the Hillsborough has been completely fitted with all necessaries for taking a new & accurate survey of that whole coast. 'Tis now expected that light houses will be erected & the harbours cleared & opened..." (see).
There is a very detailed article: "A Description of the Island of Anticosti..." which is at the entrance of the St. Lawrence River between Quebec & New Brunswick (see hyperlink for more). Also in this issue: "Observations on the General Practice of Inoculation". Near the back is the "Historical Chronicle" which has the latest news reports of the day.
Included is the one foldout plate called for, showing two renditions of "Hadley's Quadrant" along with both sides of an ancient coin. This plate folds out to 8 1/2 by 10 1/2 inches & is in great condition. There is a related article as well.
Complete in 48 pages, 5 by 8 inches, full title/contents page with an engraving of St. John's Gate, nice condition (see images).
A very nice magazine from the "mother country" from this troublesome year between the Stamp Act & the Boston Massacre, with a wide range of varied content. This was the first periodical to use the word "magazine" in its title, having begun in 1731 and lasting until 1907.