Home > Back to Search Results > From early in the Confederacy...
Click image to enlarge 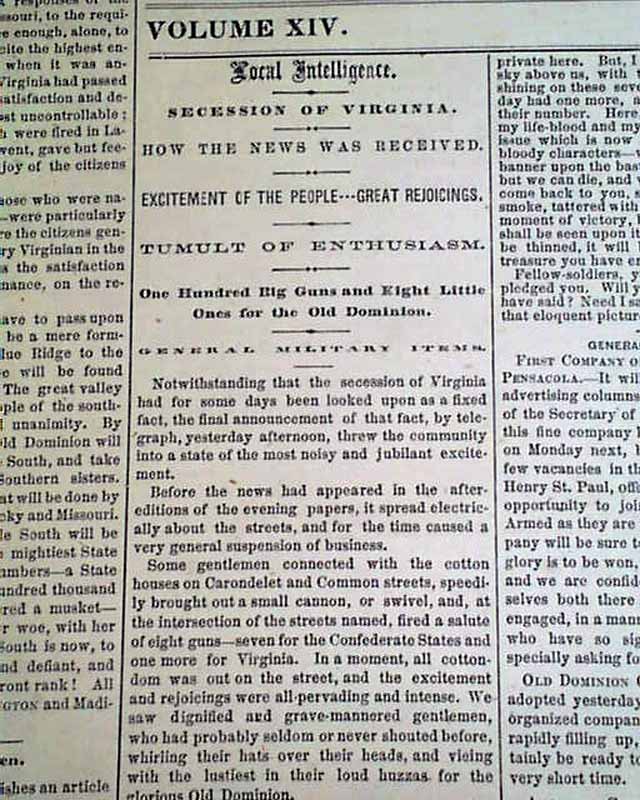 From early in the Confederacy...

Truly Confederate newspapers from New Orleans are very difficult to find, as Admiral Farragut entered the mouth of the Mississippi in mid-April, 1862 and finally took New Orleans on April 28. Shortly thereafter Benjamin Butler moved in and took control of the city which surrendered without a fight. So "Confederate" issues from New Orleans are limited to those published between Louisiana's secession from the Union on January 26, 1861 and the end of April, 1862, just a brief 15 month period.
This issue is from the very beginning of the outbreak of war. The front page includes: "Secession Of Virginia" "How the News  Was Received" "Excitement of The People--Great Rejoicing" "Tumult Of Enthusiasm" with much related text. Plus another column on the ftpg. has: "Secession Of Virginia" "Texas Intelligence--Preparations For War" "From Pensacola" and other war-related items.
Page 4 has an item: "What Is The Object?" which begins: "The note of preparation for active hostilities against the South is now sounding throughout every Northern state..." (see). Also on pg 2: "The War Spirit in Mississippi" "Talk on Change" and other items, including many ads. Pg. 5 is taken up with ads which includes several for "Negroes For Sale" with small illustrations. The bkpg. has "River Intelligence" and a huge number of "Steamboat" ads, all with little illustrations.
Unusual in that this is an 8 page issue, with various tears at the spine from disbinding from a volume, otherwise nice condition.