Home > Back to Search Results > Terrific map of America from 1763...
Click image to enlarge 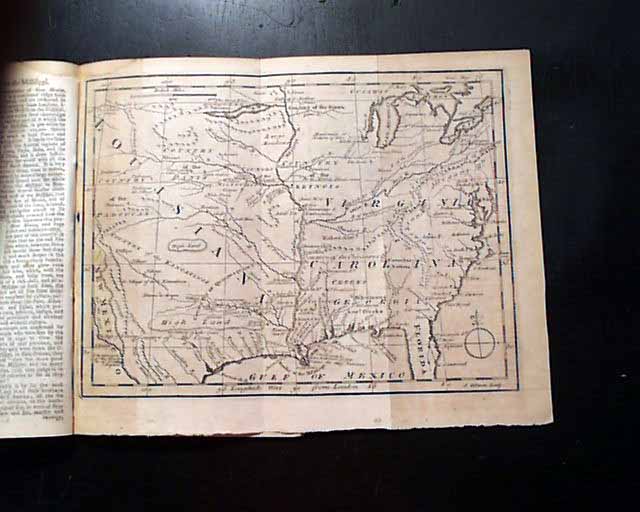 Certainly the prime feature of this issue is the very nice foldout map which shows the greater portion of colonial America in 1763, showing from the Great Lakes to most of Florida, to New Mexico, to the upper portions of "Louisiana" (see).
The accompanying article, which takes over 3 pages, is titled: "Some Account of Louisiana, or the Western Ports of Virginia and Carolina, & of the Countries that lie on both sides the Mississippi, where a Colony from the Plantations is actually now Forming." The article is very descriptive (photos show portions) noting that this large expanse is divided into four parts: "The Sea-coast" "The lower Louisiana, or Western part of Carolina" "The upper Louisiana, or Western part of Virginia" and "The Mississippi" with much about the topography and the crops of each region, particularly maize, tobacco, indigo and cotton.
The map measures 8 1/4 by 10 inches, some light toning to the left edge, otherwise very nice. This map is noted on the title/index page as well.
The Louisiana text is followed by a report: "...about a proposal to settle a very extensive colony upon the finest part of the Ohio".
In the "Historical Chronicle" which contains various news items, is a report beginning: "An insurrection of the negroes has lately happened in Berbice, one of the Dutch settlements in the West Indies...affirms that the negroes, to the number of 3000, had murdered most of the whites..." with more.
Complete in 54 pages with full title/index page. The noted map is the only plate called for in this issue.  Measures 5 by 8 1/4 inches, nice condition.