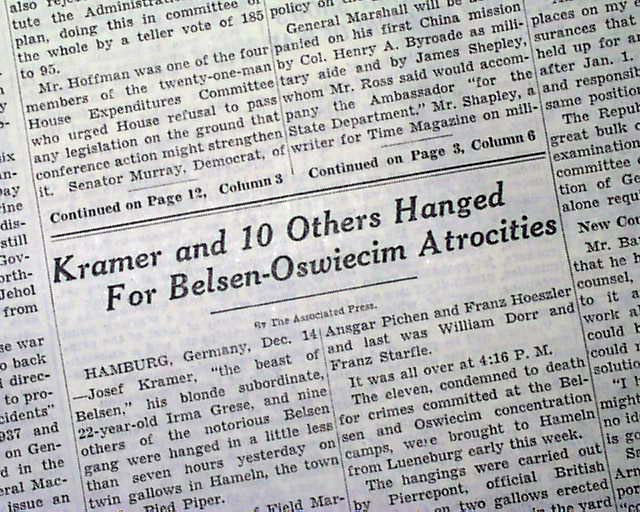 Near the bottom of the front page is a two column heading that reads: "Kramer and 10 Others Hanged For Belsen-Oswiecim Atrocities" (see) Also a two column headline at the top of the front page: "Halsey Gets Hero's Acclaim As Million defy Cold, Snow" with subhead. (see) Reporting continues on page 3 with related photos. Coverage on the famed Pacific commander, Fleet Admiral William Frederick Halsey, Jr.'s welcome home ticker tape parade in New York City. Always nice to have notable events in history reported in this World famous publication.
Other news, sports and advertisements of the day. Complete in 32 pages, this is the rare rag edition that was produced on very high quality newsprint, with a high percentage of cotton & linen content, allowing the issues to remain very white & sturdy into the present. Given the subscription cost, libraries & institutions rather than individuals were the primary subscribers of these high-quality editions. Nice condition.

wikipedia notes: Josef Kramer (November 10, 1906 – December 13, 1945) was the Commandant of the Bergen-Belsen concentration camp. Dubbed "The Beast of Belsen" by camp inmates; he was a notorious Nazi war criminal, directly responsible for the deaths of thousands of Jews and other people. He was convicted of war crimes and hanged in Hamelin prison by noted British executioner Albert Pierrepoint after World War II.