Home > Back to Search Results > Where has Jesse James' body gone?
Click image to enlarge 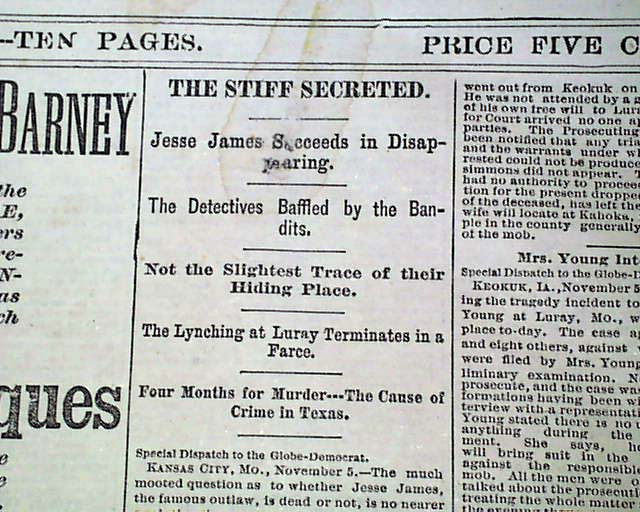 Where has Jesse James' body gone?

The ftpg. has column heads responding to the rumored death of Jesse James reported in this newspaper 2 days prior (was not true): "THE STIFF SECRETED" "Jesse James Succeeds in Disappearing" "The Detectives Battled by the Bandits" "Not the Slightest Trace of Their Hiding Place". The report begins: "The much mooted question as to whether Jesse James, the famous outlaw, is dead or not, is no nearer a solution than on Monday when the news was first flashed over the wires that he had been shot & killed by Gus Shepherd..." with more taking most of the column.
Page 3 has over half a column headed: "THE JAMES BROTHERS" "An Incident Connected with the Outlaws After the Gad's Hill Robbery".
Ten pages, light damp stain in the ftpg. heads with a minor repair affecting a few letters (see), generally nice condition.