Home > Back to Search Results > The Constitution defeats the Java...
Click image to enlarge 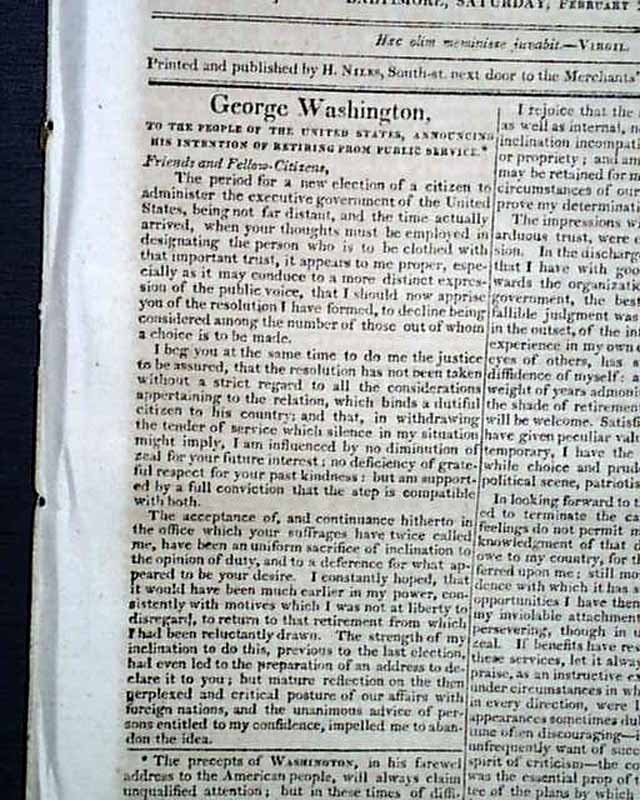 The Constitution defeats the Java...


NILES' WEEKLY REGISTER, Baltimore, Feb. 20, 1813  The prime feature of this issue would be the nice account of the naval batter between the U.S.S. Constitution and the Java, a victory for the American ship. The article is headed: "Splendid Naval Victory, by the Frigate Constitution, commodore Bainbridge" with the text beginning: "We have been obligingly favored by major Robert Carr...with the following interesting account of another splendid naval victory..." and what follows is a detailed account of the battle, carrying over to the following page (see photos). This is followed by other military reports concerning the War of 1812.
Also of interest in this issue is a printing of George Washington's farewell address to the people of the United States, taking all of pages 1, 2 and 3, continuing in a future issue. This was his address from 1796.
Other items include: "Yazoo Claims" "Proceedings of Congress" "Annoyance of the Enemy" "Events of the War" "The Non-Importation Law" among other items.
Sixteen pages, 6 1/4 by 9 3/4 inches, very nice condition.