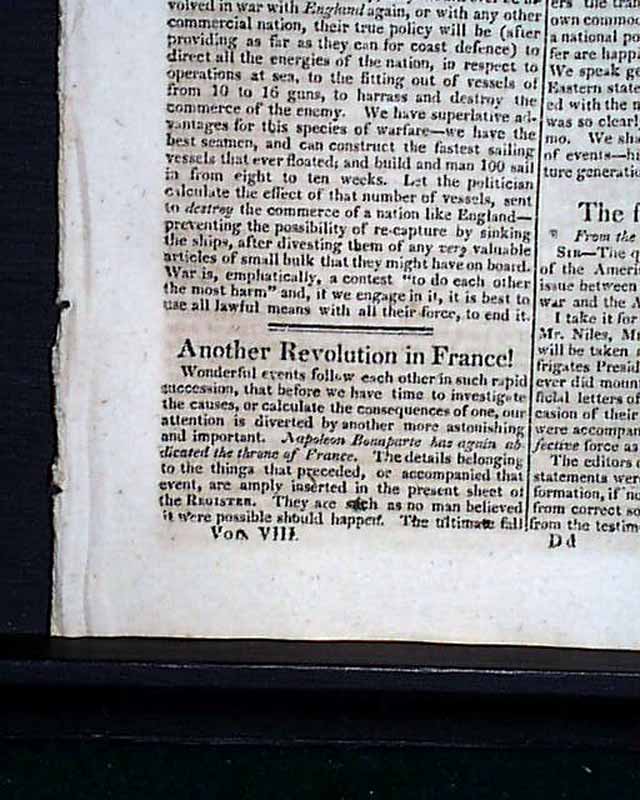 
NILES' WEEKLY REGISTER, Baltimore, August 12, 1815  The front page has: "Another Revolution in France!" which begins: "...Napoleon Bonaparte has again abdicated the throne of France. The details belonging to the things that preceded...What is the fate reserved for fickle France, we dare not conjecture...We are quite indifferent to the fate of Bonaparte as an individual..." with more. (see photos).
Also on the front page is: "The Force of our Frigates" and there is also over a full page list of: "American Prizes" continued from a previous issue. Further on is a very historic letter signed: Napoleon, being his letter to the French people on his abdication, reading in part: "...I had reason to hope for success and I have braved all the denunciations of the powers against me. Circumstances are changed. I offer myself a sacrifice to the hatred of the enemies of France...MY POLITICAL LIFE IS ENDED; and I proclaim my Son, under the title of Napoleon II, Emperor of the French..." (see photos).
Near the back is a fascinating report reading: "Yesterday intelligence reached us, by telegraph, that NAPOLEON had been hung at Paris, every branch of his family massacred, and the members of both houses SHOT! The number consisted of eight hundred. In two days we shall have positive accounts of this news..." which was ultimately untrue.
Sixteen pages, 6 1/4 by 9 3/4 inches, lite scattered foxing, nice condition.