Home > Back to Search Results > A decision that would lead to the Boston Tea Party...
Click image to enlarge 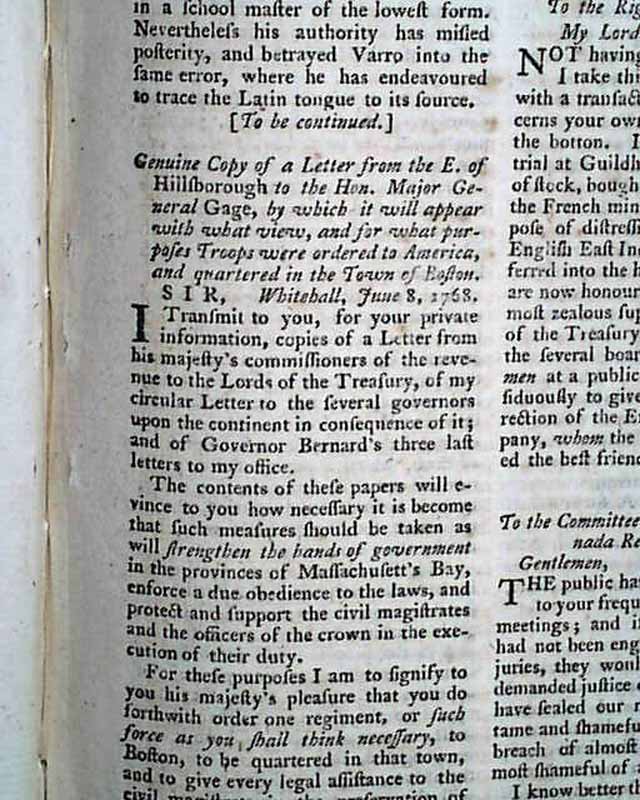 A decision that would lead to the Boston Tea Party...

Item # 647468 THE GENTLEMAN'S MAGAZINE, London, March, 1770  The only full page plate called for is present: "The Right Honourable William Pitt, Earl of Chatham", a notable member of Parliament who was a supporter of the American position during the difficulties of the 1770's.
Also in this issue is: "...A Letter from the E. of Hillsborough to the Hon. Major General Gage...for What Purposes Troops were Ordered to America & Quartered in the Town of Boston" dated June 8, 1768 (see).
Near the back is the "Historical Chronicle" which has the latest news reports of the day and includes a report that: "The merchants trading to America attended the House of Commons, the motion for the repeal of the acts of revenue affecting the Colonies, being that day taken into consideration; the duties on glass, red lead, painters colours, paper, etc. are to be remitted, but that of tea continued." It was this decision to keep the tax on tea that would lead to the Boston Tea Party three years later.
Complete in 48 pages, 5 1/2 by 8 3/4 inches, full title/contents page featuring an engraving of St. John's Gate, wide untrimmed margins, great condition.

A very nice magazine from the "mother country" from the month of the Boston Massacre with a wide range of varied content. This was the first periodical to use the word "magazine" in its title, having begun in 1731 and lasting until 1907.