Home > Back to Search Results > General Jackson's order to the Tennessee Volunteers...
Click image to enlarge 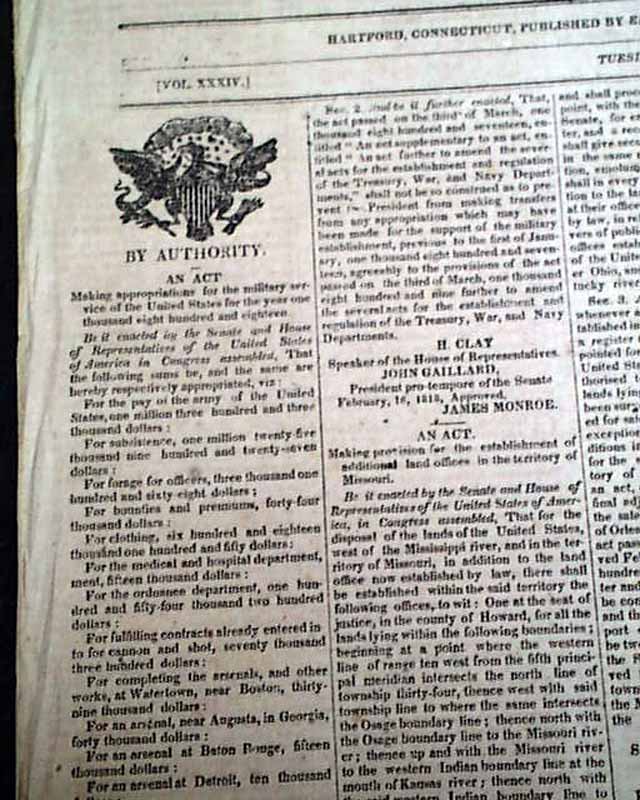 
AMERICAN MERCURY, Hartford, Connecticut, March 3, 1818  On the ftpg. under an engraving of the Great Seal are three "Acts", each signed in type: James Monroe. There is also an engraving of the Great Seal in the masthead.
Of particular interest is a pg. 2 report under "The Seminole War" that has a few details about concentration of troops at Fayetteville, as appointed by Gen. Jackson. There is a second report stating that the Kentucky volunteers were en route to join Gen. Jackson. Hereafter is the "General Order" issued by Gen. Jackson summoning the Volunteers of West-Tennessee  "to the field" for another campaign to fight the Indians, signed in type: Andrew Jackson (see photos).
On pg. 3 under "Another Revolutionary Patriot Fallen" is a detailed obituary about the death of General David Humphreys, a former aid de camp to General George Washington during the Revolutionary War. Mentions that he was awarded an "elegant sword"  by Congress "...for his signal services at the siege of Yorktown..." (see)
Complete in 4 pages, second leaf has a small hole in unrelated content, nice condition.