Home > Back to Search Results > 'Black Sox' players are found not guilty... Death of Enrico Caruso...
Click image to enlarge 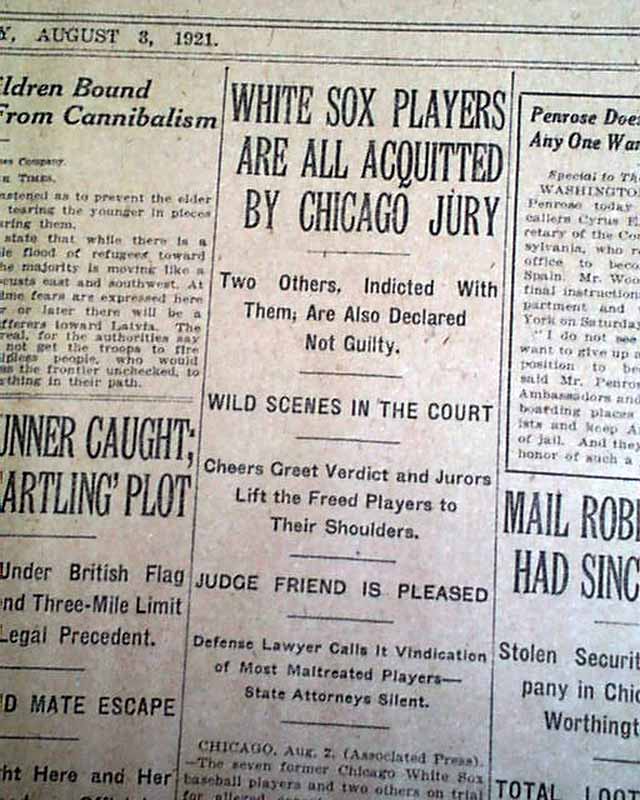 The top of a front page column has the historic verdict on the White Sox players who were accused of conspiring to throw the 1919 World Series. The column heads include: "WHITE SOX PLAYERS ARE ALL ACQUITTED BY CHICAGO JURY" "Two Others, Indicted With Them, Are Also Declared Not Guilty" "Wild Scenes in the Court" "Cheers Greet Verdict and Jurors Lift the Freed Players to Their Shoulders" "Judge Friend Is Pleased" "Defense Lawyer Calls it Vindication of Most Maltreated Players--State Attorneys Silent". The report takes most of the column & concludes on page 3. Despite the court verdict, the commissioners of baseball would ban all eight players accused.
Of unrelated interest is another ftpg. column head: "ENRICO CARUSO DIES IN NATIVE NAPLES; END CAME SUDDENLY" with more.
Complete in 28 pages, irregular at the blank spine from disbinding, generally in good condition.