Home > Back to Search Results > On the founding of Savannah, Georgia...
Click image to enlarge 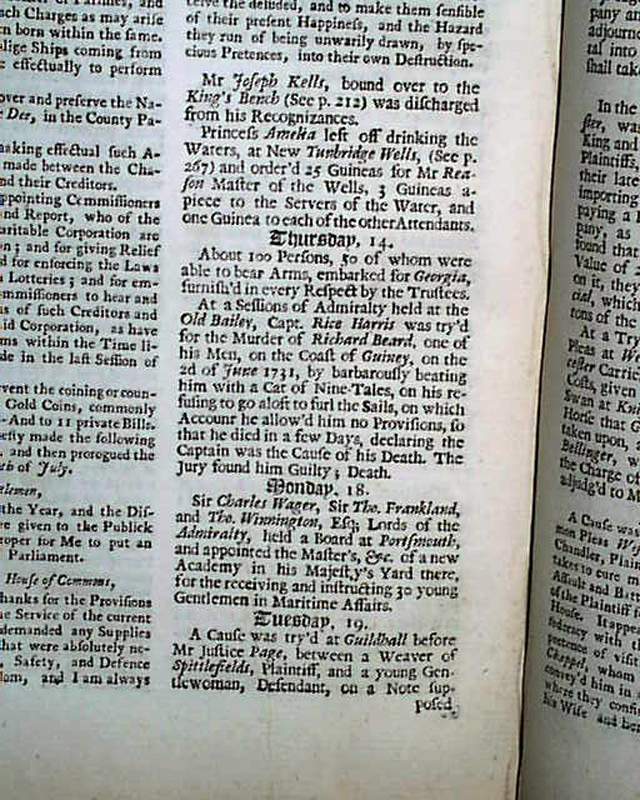 On the founding of Savannah, Georgia...

Item # 647039 THE GENTLEMAN'S MAGAZINE, London, June, 1733  Among the articles noted in the table of contents are: "Of National Virtue" "Of Rights, Natural and Civil" "Of Laws about going to Church, Free Thinking & Toleration" "Madness and Folly" "A Scheme for Excising Tobacco and Wine Palliated" "South Sea Company's Petition" and more.
Near the back is a report reading: "About 100 persons, 50 of whom were able to bear arms, embarked for Georgia, furnished in every respect by the Trustees."
Another report taking half a column is headed: "Plantation Affairs & includes: "Letters from South Carolina inform us that the affairs of that Province are in the utmost confusion...The people in trade are much alarmed at the late attempts to increase the extraordinary quantity of paper money & to suspend the Habeas Corpus Act...From Georgia, That the people there are all in good health & go on briskly with the town of Savannah & are in perfect amity with all the Indians & that they have erected a battery of several pieces of cannon in a fort that commands the River. From Annapolis Royal, that about the 14th instant...it became so dark that the people were obliged to light candles. This strange phenomenon was the most extraordinary as there was no possibility of an eclipse at that time. From Jamaica, that the run away Negroes are become very troublesome..." with a bit more (see photos).

Complete in 54 pages with full title/contents page. Measures 5 1/2 by 8 3/4 inches, unevenly trimmed pages with wide margins. This is from just the third year of this magazine's existence & before any maps or plates were included.