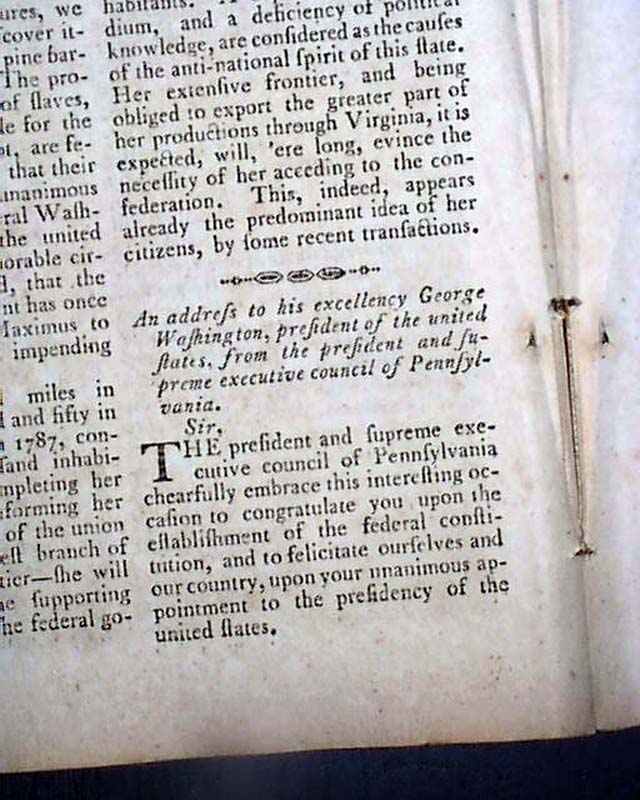 Item # 646965 THE AMERICAN MUSEUM, (Philadelphia), April, 1789  A very significant issue, and one of a few magazines or newspapers with the text reporting the actions of Congress formally counting the votes for the first President of the United States. Near the back are several pages of the: "Proceedings of Congress", the first headed: "Brief Sketch of the Most Interesting of the Proceedings of Congress, Monday, April 6, 1789" which begins: "A Quorum of both houses met, and on counting the votes for president and vice president, they appeared to be: For President: His excell. gen. Washington....69. For vice president: Hon. John Adams.....34..." followed by a list of votes for others. This is printed; "Upon which his excellency George Washington, esq. was announced president, and the honourable John Adams, esq. vice president of the united states. ..." and following this is a list of the federal legislature beginning with the newly elected President & V.P. followed by the list of Senators, then the Representatives (see).
Further to the back is some nice and detailed reporting on the ceremonious proceedings of Washington's trip from Mount Vernon to New York for his inauguration.
As if this was not sufficient, the main body of the issue has some very fine content as well, too much to list here. One item is "An Address to his Excellency George Washington, President of the United States..." from the assembly of Penna., followed by the: "Answer" signed in italic type: George Washington. Also a letter to Washington from the faculty of the University of Pennsylvania, with his: "Answer" signed in type: G. Washington. Also inside: "History of the Treatment of Prisoners Among the American Indians" and: "Remarks on the North American Indians, by Dr. Franklin" which takes nearly 3 pages. Taking nearly 4 pages is: "Remarks on the Amendments to the Federal Constitution..."; "General Washington's Account of the Battle of Trenton..." takes over a full pg. and is signed in type: G. Washington, and which mentions the very historic crossing of the Delaware River: "...but the quantity of ice made that night impeded the passage of the boats so much that it was three o'clock before the artillery could be got over, and near four when the troops took up the line of march...".
On many accounts, a terrific magazine. The table of content is on the back two pages.
Complete in 112 pages, 5 by 8 1/4 inches, disbound from a volume without a full title page, very nice condition.