Home > Back to Search Results > The Custer Massacre, and more...
Click image to enlarge 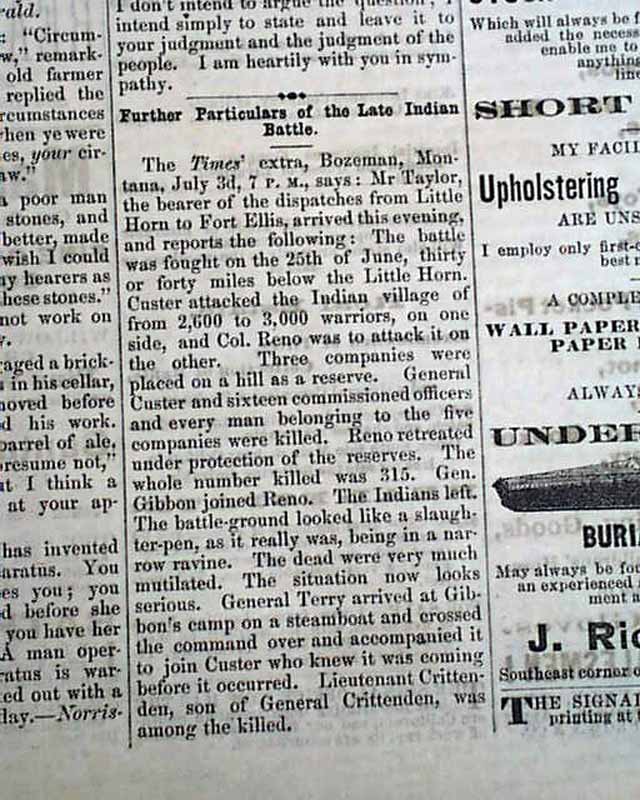 The Custer Massacre, and more...

The front page has: "The Situation Grave" which concerns the recent Custer Massacre, beginning: "It is agreed on all hands that there must now be an Indian war, till hostile Indians of the Northwest have been chastised & subjugated. The cause & responsibility of the Little Big Horn massacre are matters of small moment in deciding what shall be done..." with more. The back page has more on this with: "Further Particulars of the Late Indian Battle" which has some particulars including: "...The battle was fought on the 25th of June, 30 or 40 miles below the Little Horn. Custer attacked the Indian village...General Custer & 16 commissioned officers & every man belonging to the five companies were killed...The battle-ground looked like a slaughter-pen...The dead were very much mutilated..." and more.
Page 2 has an items on the Missouri Pacific train robbery which was done by the James Gang & Younger brothers.
Four pages, minor loss to the upper left corner, generally good condition.