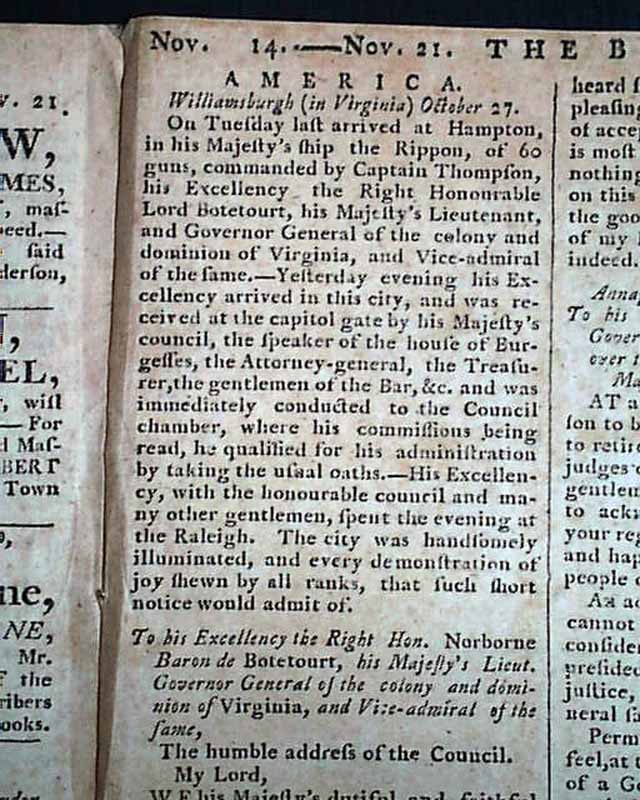 
THE BOSTON CHRONICLE, Massachusetts, Nov. 21, 1768  The front page is entirely taken up with "...the account given of the late transactions respecting Sir Jeffery Amherst by the friends of the administration." with much on the relationship with General Gage, portions including: "...for Sir J.A. was the only person in England who could not go to America in that capacity. He had been Commander in Chief there; therefore, by the rules of the army, & consistent with his own character, he could not go to serve under General Gage, the present Commander in Chief there, who is an inferior officer & who had served under Sir J. in America..." with more.
Pages 2 & 3 have various reports on the events in Corsica & elsewhere in Europe. Page 7 has items from Williamsburg, Virginia, including a note beginning: "We his Majesty's dutiful & faithful subjects, the Council of Virginia, beg leave to congratulate your Excellency upon your appointment to this government..." with the response.  Also a letter to the governor of Maryland, and a report which includes: "...have suspended their execution upon the following conditions, to wit 'Providing the act imposing duties on paper, glass, etc. be repealed, or that orders sent from here in general are executed..." with more (see).
Eight pages, 8 1/2 by 10 1/4 inches, very nice condition. This is a volume one issue.