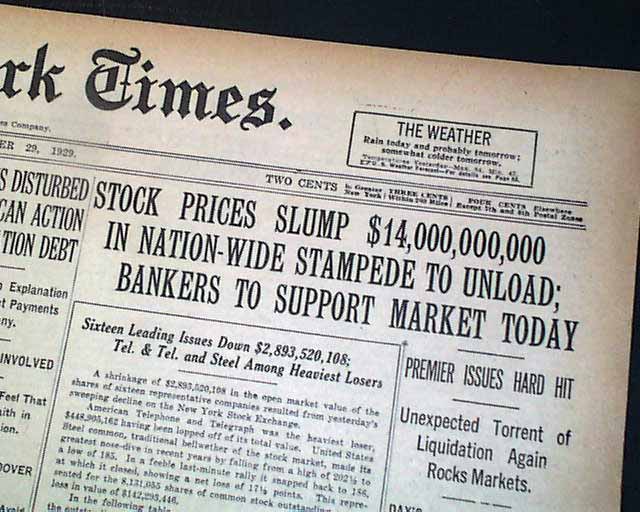 Of the several dates of the prestigious "Times" which reported the Stock Market Crash in late October this may well be the most famous, as it is the issue selected for inclusion in the popular coffee table book: "One Hundred Years of Famous Pages from The New York Times".
The recognized front page headline reads: "STOCK PRICES SLUMP $14,000,000,000 IN NATION-WIDE STAMPEDE TO UNLOAD; BANKERS TO SUPPORT MARKET TODAY." There are related subheads as well including: "Premier Issues Hard Hit" "Unexpected Torrent of Liquidation Again Rocks Markets" "Day's Sales 9,212,800" "Nearly 3,000,000 Shares Are Traded in Final Hour--The Ticker Lag 167 Minutes" and more (see).
Of the thousands of newspapers in print in the United States in 1929, the "New York Times" ranks among the most desired in reporting not just this 1929 Crash, but any historic financial report as Wall Street was located in New York City.
Typically headlines in other newspapers chose a more optimistic headline, apparently in an effort to calm its subscribers. But there is no such concern in this headline with "...Nation-Wide Stampede To Unload..." prominent at the top of the front page.
This is the complete 64 page issue, disbound, an archival mend to page 2, very nice, clean condition.
A rare opportunity for a cornerstone issue for any 20th century newspaper collection.