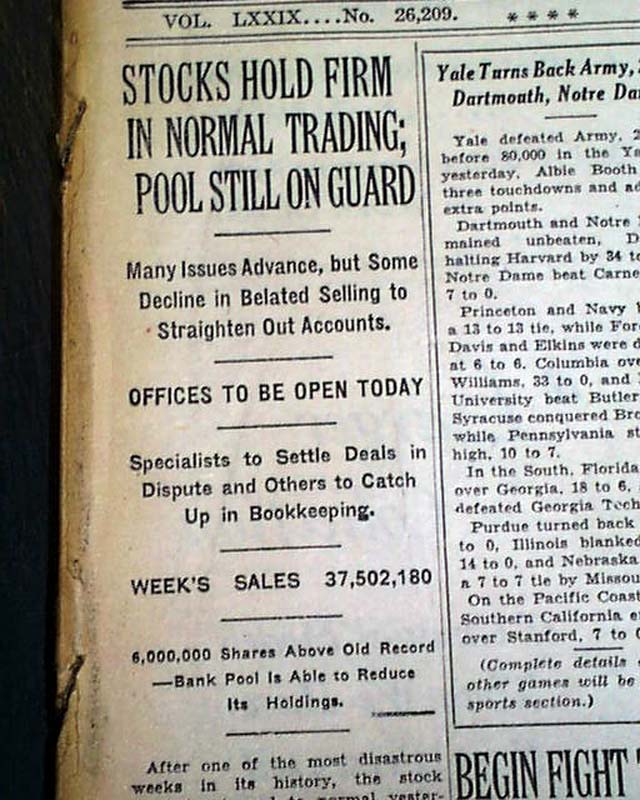 The stock market crash of 1929 did much to define America for the next decade, resulting in the Great Depression and all the trauma relating to it. It seemed common for many newspapers to put a positive spin on the on-going tragedy, so front page reports often conflicted with the reality of the time.
Given that the stock exchange is in New York City, the "Times" remains one of the most desired of all newspapers on the crash. The top of the first column has heads including: "STOCKS HOLD FIRM IN NORMAL TRADING; POOL STILL ON GUARD" "Many Issues Advance, but Some Decline in Belated Selling to Straighten Out Accounts" "Offices To Be Open Today" "Specialists to Settle Deals in Dispute and Others to Catch Up in Bookkeeping" and more. The article carries over to page 16 where is found another optimistic article concerning the market (see).
Terrific to have an issue of the Times from the midst of the October, 1929 stock market crash. Curious that these headlines appeared just 3 days after "Black Thursday" and 2 days before "Black Tuesday"
The complete Sunday issue with over 100 pages, disbound and in great condition.