Home > Back to Search Results > The most famous of all Stock Market Crash newspapers...
Click image to enlarge 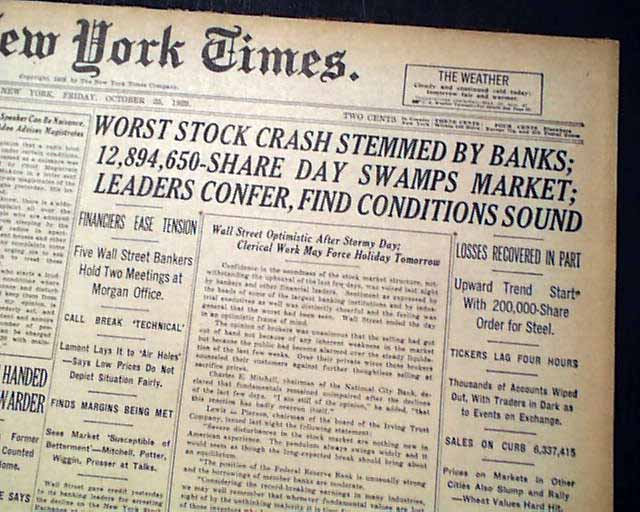 Of the several dates of the prestigious TIMES which reported the Stock Market Crash in late October this may well be the most desired, reporting on the infamous "Black Thursday" on Wall Street which would forever change society & beginning the Great Depression.
The famous front page headline reads: "WORST STOCK CRASH STEMMED BY BANKS; 12,894,650 SHARE DAY SWAPS MARKET; LEADERS CONFER, FIND CONDITIONS SOUND".  There are related subheads as well reading: "Losses Recovered In Part" "Upward Trend Starts With 200,000 Share Order for Steel" "Tickers Lag Four Hours" "Thousands of Accounts Wiped Out, With Traders in Dark as to Events on Exchange" and more (see).
Of the thousands of newspapers in print in the United States in 1929, the "New York Times" ranks among the most desired in reporting not just this 1929 Crash, but any historic financial report as Wall Street was located in New York City. Particularly desired are the words "Stock Crash", which rarely appeared in newspaper reports of this event.
This is the complete 60 page issue, disbound, and is in uncommonly nice condition. The issue has virtually no flaws to speak of and is in very clean condition.