Home > Setting the precedent for the inaugural ceremonies...
Click image to enlarge 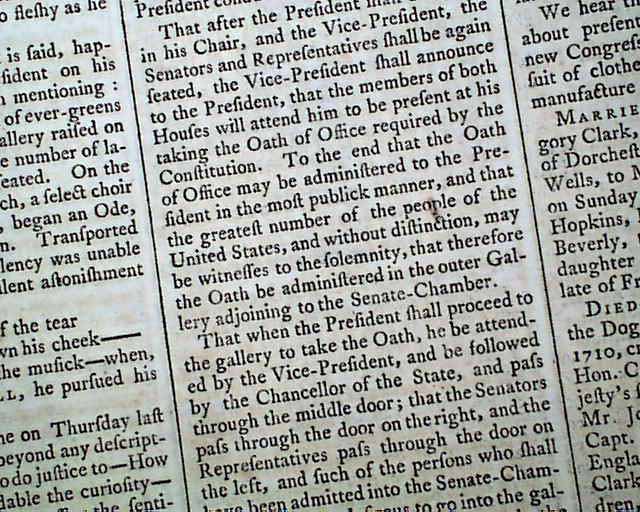 Setting the precedent for the inaugural ceremonies...

A terrific issue from the beginning days of the United States, with page 2 reporting on the formal reception of Washington to Philadelphia en-route to his inauguration in New York a few days later. Then page 3 begins with the very detailed account of his arrival in New York City, beginning: "This day, at about half after 2 o'clock, the PRESIDENT of the United States landed at Murray's Wharf..." with much, much more (see). It even describes the clothes he was wearing.
But perhaps the most notable content--and the first we have seen this in any newspaper--is the detailed report on how the inaugural ceremonies are to take place. It is prefaced with a report dated April 28: "The Committees of both Houses of Congress, appointed to take order for conducting the ceremonial of the formal reception, etc. of the President of the United States, on Thursday next, have agreed to the following order thereon...". And what followed are all the details of how the inaugural ceremonies (April 30) will take place, setting a very significant precedent on how future inaugural events would be conducted. This detail takes nearly a full column, a few bits including: "...That a chair be placed in the Senate Chamber for the President...That the members of both Houses assemble in their respective chambers precisely at 12 o'clock..." and noting their order. Also: "...that after the President shall be seated in his chair, and the Vice President...that the members of both Houses will attend him to be present at his taking the oath of office required by the Constitution...the oath of office may be administered to the President in the most publick manner, and that the greatest number of the people of the United States, and without distinction, may be witnesses to the solemnity..." and then much, much more .
It is notable that they wanted to provide for the common people ("without distinction") to witness the historic event, far removed from the formal coronations in Europe which were witnessed only by those "with distinction".
An exceedingly noteworthy issue!
Four pages, an old tape stain near a bottom quarter of the front leaf causes no loss of text or readability. Archivally rejoined at the spine, otherwise in very nice condition.