Home > Back to Search Results > Review & pre-premiere of "The Passion of the Christ", in a Los Angeles newspaper...
Click image to enlarge 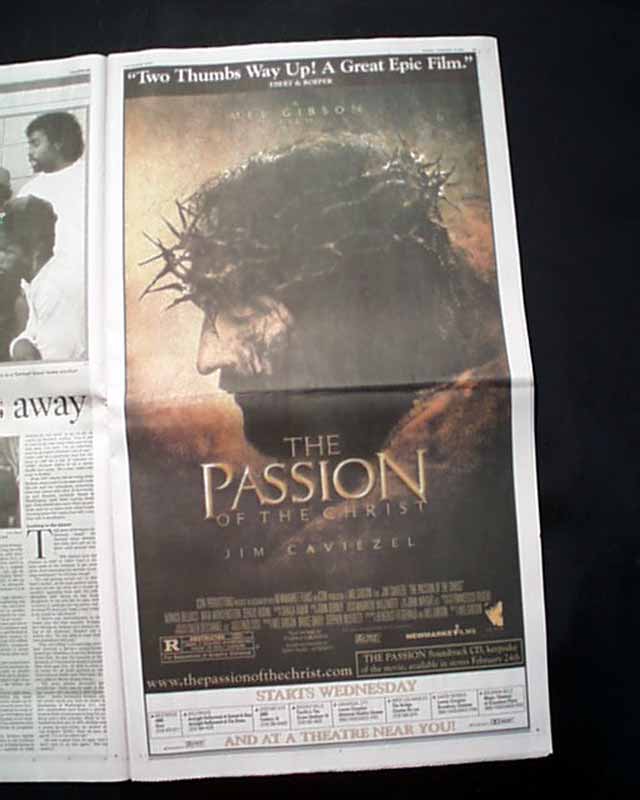 Review & pre-premiere of "The Passion of the Christ", in a Los Angeles newspaper...

A terrific issue on the pre-premiere of the motion picture hit "The Passion of the Christ" and perhaps no better issue could be found than this, the leading newspaper from the home of the entertainment industry - the Hollywood area's prime publication.

Note: Where else might one find authentic, poster-size ads for movie showings, in the most desirable Hollywood-area newspaper - as we were lucky enough to obtain this (and others) indirectly from the Los Angeles Times' own collection? It simply doesn't get any better! In over 40 years of collecting, we have yet to see such unique & dramatic coverage with truly top-shelf, eye-catching displayability (see images).

The front page of section F has a review of the film headed: "The art of Faith" with illustration. And perhaps more significant is the terrific, full page poster-like advertisement for the film printed 3 days prior to it's opening to the public. (see). Other nice movie advertisements of the day.
A quite rare issue as it would not have been saved since it contains no historically significant content. Present are the complete sections 1 and F totaling 74 pages. Great condition.