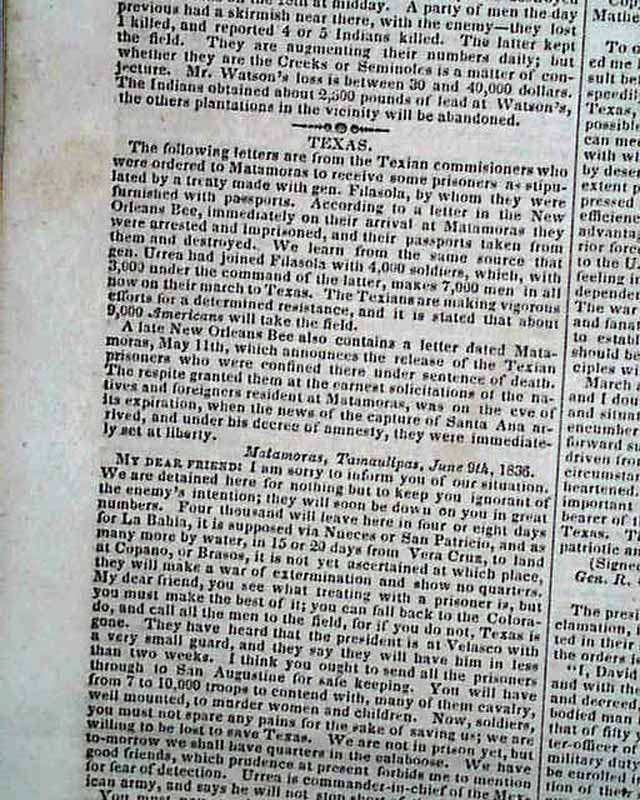 
NILES' WEEKLY REGISTER, Baltimore, July 23, 1836  Most of an inside page is taken up with reports headed: "Texas" which includes several letters, one beginning: "I am sorry to inform you of our situation. We are detained here for nothing but to keep you ignorant of the enemy's intention; they will soon be down on you in great numbers...". Included also is a letter from "Near Sabine, July 9, 1836" to General Dunlap signed in type by: Sam. Houston, which has near the beginning: "...I regret  so much delay will necessarily result before you can reach us, we will need your aid & that speedily, the enemy in large numbers are reported to be in Texas..." with more. Also a document signed in type: D. G. Burnet, President, with a prefacing note: "The president of Texas, David G. Burnet, has issued his proclamation in which he exhorts the people of Texas to be united in their movements towards the enemy..." (see photos)
Another page has a report headed: "Independence Of Texas" (see photos).
Other items include: "Texas Celebration" "The Creek War" "Moral Management of the Insane" and more.
Sixteen pages, 6 1/4 by 9 1/2 inches, lite scattered foxing, otherwise in very nice condition.