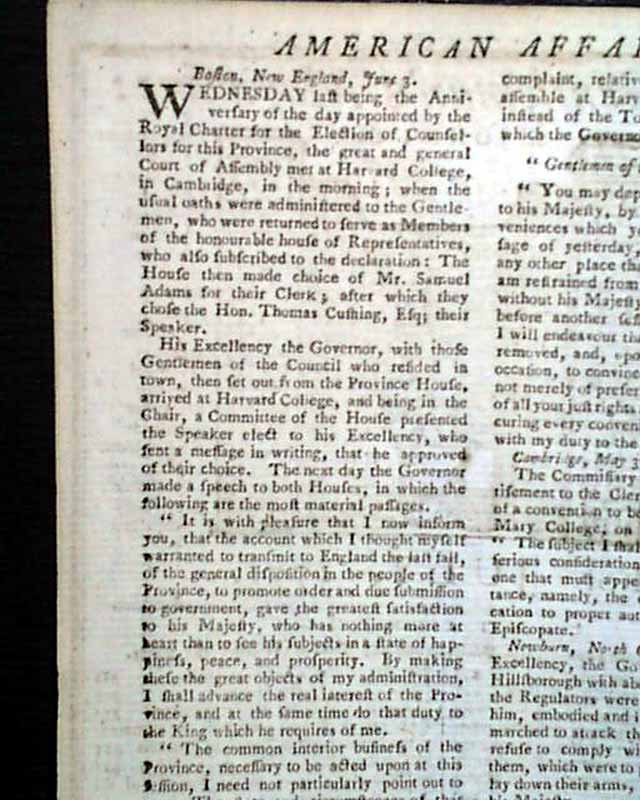 Item # 646576 GENTLEMAN'S MAGAZINE, London, July, 1771  The key content in this issue is inside the title page, headed: "American Affairs" being a report on what most historians describe as the first shedding of blood of the war for American independence.  A report from: "Newburn, North Carolina" [New Bern], states in part: "His Excellency, the Governor, having reached Hillsborough with about 1,300 troops, found the Regulators were about 40 miles above him, embodied and in arms, he immediately marched to attack them in case they should refuse to comply with the terms...which were to give up their principals, lay down their arms & swear allegiance to his Majesty...".  It continues: "...his Excellency received a messenger with terms... but they being wholly inadmissible, he marched..." (see)  Additional text includes details of the ensuing battle, including the death count. This was later to become known as the Battle of Alamance. See the hyperlink for more detail.
This page also has over a column of reports from Boston & Cambridge concerning relations with England (see for portions).
Included is a large foldout map titled: "A Plan of the Grand Canal from the Trent to the Mersey" rivers in England, with some of the principal towns along the way being Lichfield, Burton, Derby, Rudgley, Stone, Newcastle, Middlewich, Northwich, Frodsham, and Warrington. This map measures 8 by 15 inches & is dated in the upper left: "Gent. Mag. July 1771".
The other plate called for is present: "Iceland Falcon" (typically missing).
Complete in 52 pages, full title/contents page with an engraving of St. John's Gate, 5 by 8 inches, great condition.