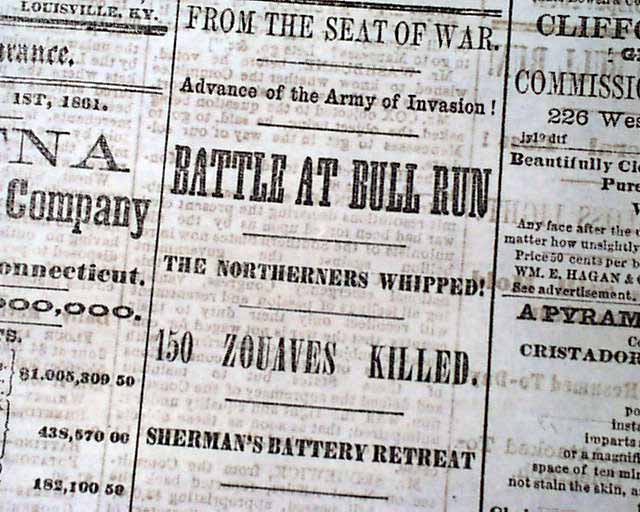 Louisville is difficult to categorize as Union or Confederate during the Civil War as, depending on the time, there were factions within the city supporting both. To placate both sides the two leading newspapers took their stands: the "Courier" was very much pro-Confederate & the "Journal" was more pro-Union. This is the pro-Confederate newspaper.
The front page has: "Army Correspondence--Letters form Se De Kay--Gen. Johnston's Order--The Retrograde March...", "Preparations for Attack--Erection of Breast Works...Paying for Substitutes", "Letter From Missouri...Women Shot at--Houses Invaded", "The War in Missouri--Signal Victories of the State Troops at Monroe..." "The Rebel Army of the Potomac--Gen. Beauregard" and even more.
The most notable content is on page 3 which has rather large one column heads: "BATTLE AT BULL RUN" "The Northerners Whipped!" "150 Zouaves Killed" "Sherman's Battery Retreat" "The Fight Still Going On!" and more. And the back page has good content as well: "Later From Bull Run!" "Heavy Federal Loss!" "Southern Loss Light!" "Southerners Still Hold Their Position" "ANOTHER FIGHT!" "The Federal Repulsed" and more.
Four pages, large folio size, some wear & minor tears at margins, archivally rejoined at the spine but generally in good condition.