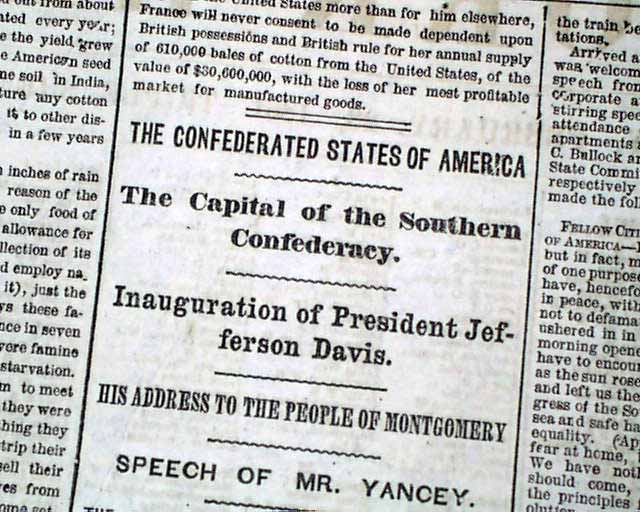 Perhaps the most significant content is on page 5 which has very extensive coverage of the travels of Abraham Lincoln to Washington, D.C. for his inauguration. The top of the page has heads: "The Presidential Progress" "Great Turnout of the Philadelphians to Witness the Ceremony" "Mr. Lincoln's Speech on the Occasion" "The Journey From Phila. to Harrisburg", "Disgraceful Conduct of the Mob" "Anticipated Trouble at Baltimore". It's the latter head which has taken on significance in history as there were thoughts of an assassination attempt on Lincoln during his journey. One of the subheads: "The Reception In Baltimore" alludes to such trouble, noting: "...It is proposed by some of the republicans...they they shall escort him through the city...it would certainly produce a disturbance of the most violent and dangerous character to the President and all who are with him. Apprehensions are expressed that the President will suffer some indignities at the hands of some fellows of the baser sort; but the better opinion is that he will, if not attended by the republicans of this city, pass through safely..." with more. See the hyperlink for much more on what has become known as the "Baltimore Plot".
Page 2 has: "The Confederate States Of America" "The Capital of the Southern Confederacy" "Inauguration of President Jefferson Davis" "His Address To The People Of Montgomery" "The President's Travels To The Capital" "Proceedings Of The Southern Congress" "Description Of Its Members" and a bit more. Also: "Inauguration Of The President" "President Davis On His Way to Inauguration" with very extensive coverage (see for portions).
Complete in 12 pages, slightly irregular at the blank spine margin, nice condition.