Home > Back to Search Results > Rare title from the 1600's...
Click image to enlarge 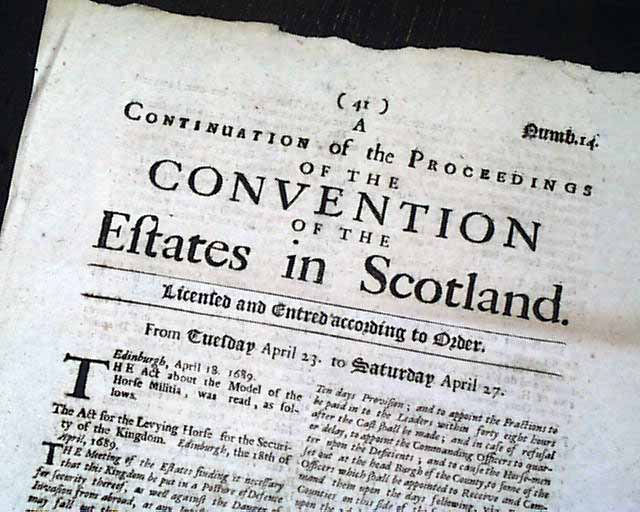 
A CONTINUATION OF THE PROCEEDINGS OF THE CONVENTION OF THE ESTATES IN SCOTLAND, London, England, April 27, 1689

The year of this issue is printed in the dateline of the lead article on the front page, as the dateline contains only the month and day.
This is issue #14 of a short-lived title which existed to report on the ongoing disputes between the Scots and English. Much of the front page is taken up with: "The Act for the Levying Horse for the Security of the Kingdom" datelined at Edinburgh. Various reports carry over to the back page, including: "...the Viscount of Dundee having fled to the North parts of this Kingdom with about 80 horse, a strong detachment of horse is sent after him to seize him and his party..." and other items.
Complete as a single sheet, wide, untrimmed margins, 7 1/2 by 12 inches, great condition.