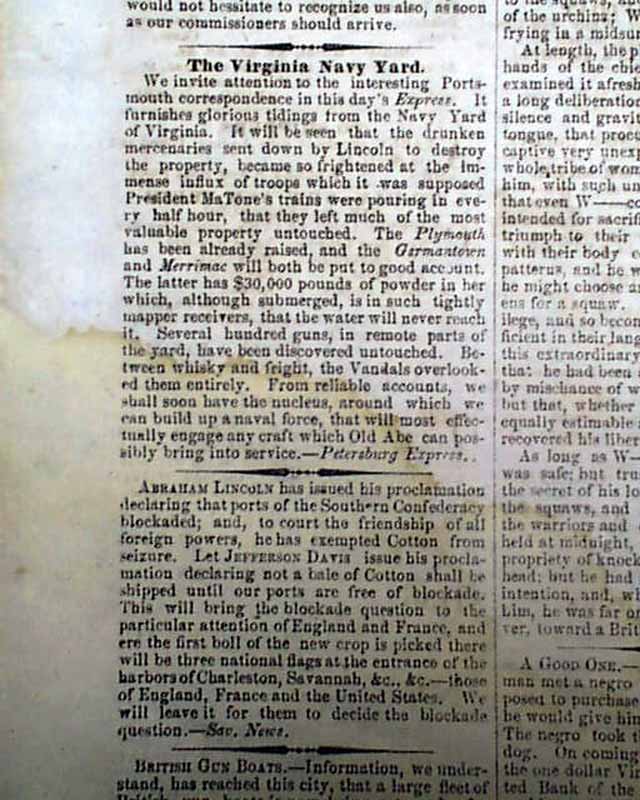 Wilmington was a major Atlantic Ocean port city for the Confederacy during the Civil War, and was one of the last ports to fall to Union forces in 1865. It ranked equal in size to Atlanta according to the 1860 census, and was a major point of entry for supplies for the entire Confederacy, exporting cotton & tobacco in exchange for munitions, clothing & food. As such it was barricaded by Union forces during the war, but blockade runners had some success in getting supplies through. It is just 170 miles north of Charleston, where the Civil War began.
Neighboring South Carolina was the first state to leave the union in Dec., 1860, and although North Carolina did not officially secede until after the bombing of Fort Sumter its political sympathies were strongly with the South ever since talk of secession began.
The front page is entirely taken up with ads besides the "Directory - State Government". Page 2 has: "France & England in Favor of the Confederacy", "The Virginia Navy Yard", "Important From Louisiana", "The Naval Academy Disbanded", "A Proposition to Settle the War by an Arbitration of the Border States" , various military dispatches, and an items beginning: "Abraham Lincoln has issued his proclamation declaring that ports of the Southern Confederacy blockaded..." (see photos). Pages 3 & 4 are entirely taken up with ads, a few of which are illustrated.
Complete in 4 pages, a few minor margin tears and light staining to the lower right but generally in very nice condition.