Home > Back to Search Results > Full year of "The Fatherland"...
Click image to enlarge 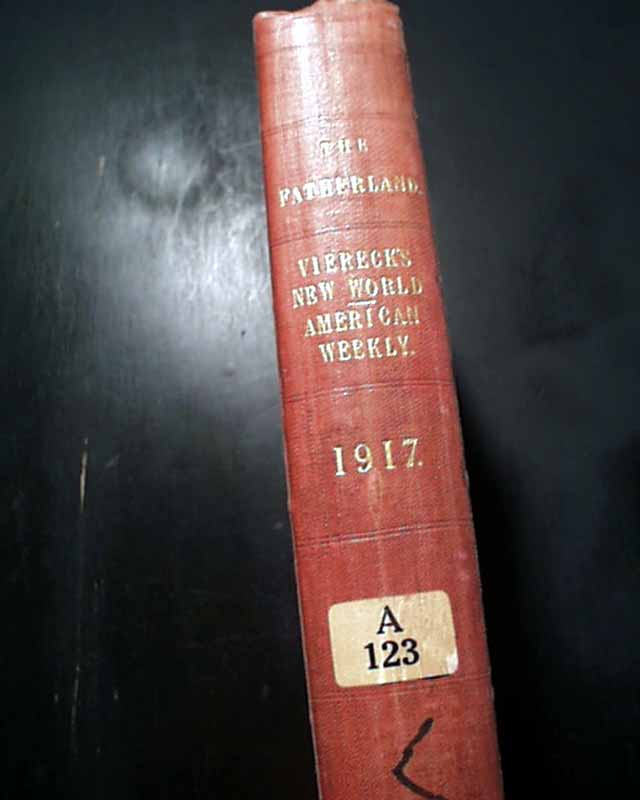 Full year of "The Fatherland"...


THE FATHERLAND, or VIERECK'S AMERICAN WEEKLY, New York. A bound volume of 52 issues for the year 1917. Begun as "The Fatherland" this was a World War I era weekly by poet, writer, and noted propagandist George Sylvester Viereck advocating "Fair Play for Germany and Austria-Hungary". Viereck outspokenly supported the German cause at the outset of World War I, and his poetry reflected his pro-German zeal. He founded "The Fatherland" in August 1914, to promote American neutrality in the war and give voice to German support.
Viereck was accused of receiving German subsidies for propaganda purposes, but the Department of Justice was unable to prosecute. Still, Viereck faced social censure, being driven from his house by a lynch mob. He later changed the title to "Viereck's American Weekly" once America entered the war, the title of most of the issues in this volume.
All issues are present although some leaves are loose. Somewhat pulpish paper so should be handled carefully. Mostly 16 pages per issue, marbled boards with red buckram spine.
This item is not eligible for free shipping.