Home > Back to Search Results > Plan to create a nobility for the United States...
Click image to enlarge 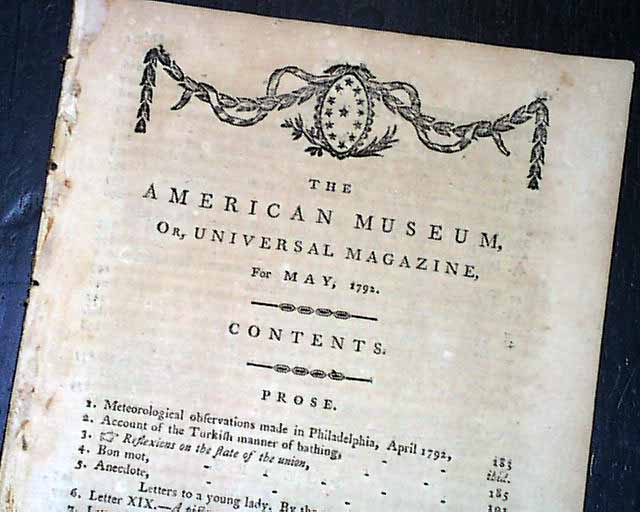 Plan to create a nobility for the United States...

Item # 646174 THE AMERICAN MUSEUM, Philadelphia, May, 1792  This title, along with the "Columbian Magazine", has the honor of being the first successful American magazine, both published in Philadelphia. The Museum was published by Mathew Carey and existed from January, 1787 thru the end of 1792.
Content includes a nearly full page: "Meteorological Observations" chart for April; "Account of the Rise of the Mississippi Scheme" "Account of the Destruction of the Mississippi Scheme" "Proofs to Ascertain that America was First Discovered by the Ancient Britons" "The Civilized Man & The Savage" "Remarkable Antiquities in Interior America" "Western Discoveries" "Remarks on Dueling"; a continuation of: "Account of the New Colony at Sierra Leone"; a continuation of: "Observations on the Indian War" "Discharge of the Four Nations" of Indians; and a very interesting: "Plans for a Nobility in the United States". Also present is a moving letter from a father written upon the untimely death of his child.
Complete in 68 pages, 5 by 8 inches, full title/contents page with a decorative heading, great condition. No appendices are included.