Home > Back to Search Results > Much on the growing troubles with England...
Click image to enlarge 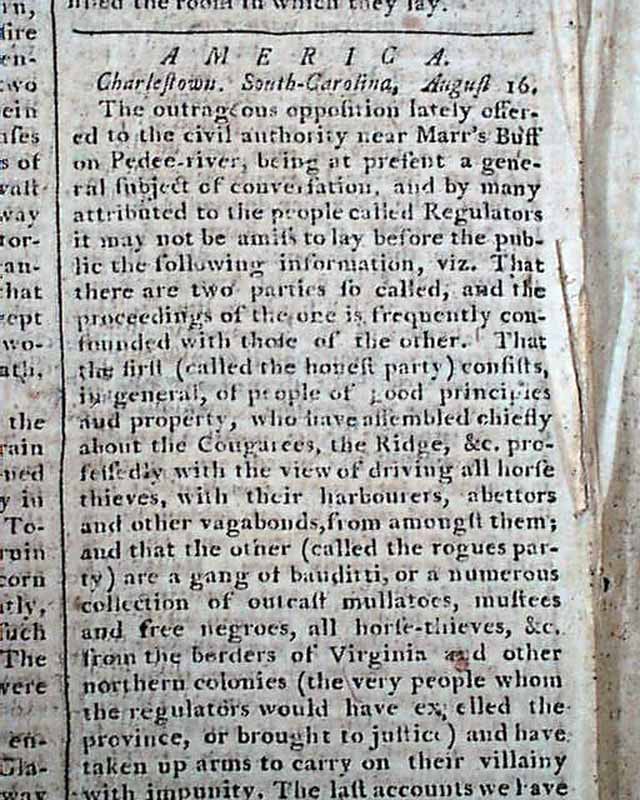 Much on the growing troubles with England...

A somewhat short-lived colonial newspaper by a publisher with Loyalist leanings. The entire front page is taken up with: "Description of the Anaconda, a monstrous species of Serpent...". Page 3 has: "A Letter from Mr. Voltaire..." signed by him in type.
Another page has a report from Charleston which begins: "The outrageous opposition lately offered to the civil authority near Marr's Bluff on Peedee River being at present a general subject of conversation & by many attributed to the people called Regulators..." with more (see). An item from Philadelphia includes: "...the General Assembly of this province broke up after finishing the necessary business...We are assured that their journals will manifest as great a regard for the Liberties of America as those of any other province...". There is also a letter from Liverpool to a merchant in New York reading: "I am not a little surprized at you Yorkers that you should attempt to force our parliament to repeal any more acts for you. Rest assured they will not. If you behave as heretofore, his Majesty will send men of war to all trading towns on the continent & stop all your trade, & likewise a number of soldiers to humble you, which I think is your just reward." (see)
Near the back is almost a full page of text concerning a meeting in Boston concerning relations with England, one bit noting: "...and here we propose to your consideration, whether the circular letter which gave such umbrage containing these expressions, or others of the like import, 'That the King and parliament by the late revenue act had infringed the rights of the Colonies, imposed an inequitable tax, and things yet worse might be expected from the independence and unlimited appointments of crown officers therein mentioned...". This carries over to the back page where is also: "...'Tis reported that some 200 families in this town have agreed not to use any more Tea. We also here the inhabitants of Charlestown have unanimously agreed to the same." (see).
A wealth of interesting reading on the troubles that would lead to the Revolutionary War. Complete in 8 pages, measures 8 1/2 by 10 1/4 inches, nice condition.