Home > Back to Search Results > Rare Confederate title from late in the Civil War...
Click image to enlarge 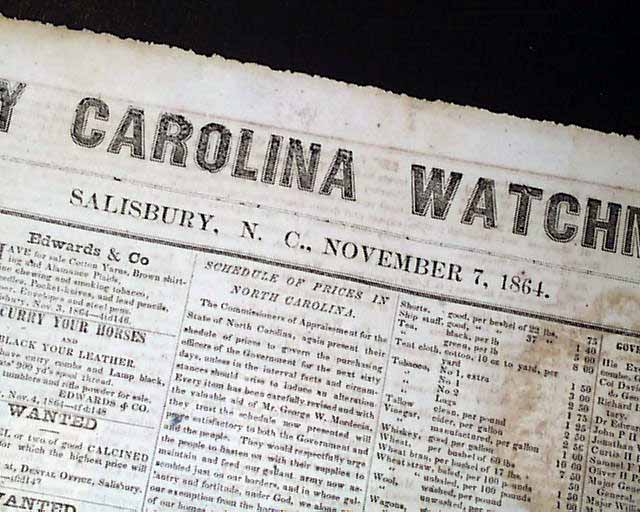 Rare Confederate title from late in the Civil War...

A quite rare title, particularly this late in the Civil War for North Carolina as this is still a Confederate newspaper evidenced by several articles, including a back page item: “Ludicrous Mistake” which notes: “It appears that a most ludicrous mistake occurred among the Yankees during Grant’s late ‘reconnaissance’…One brigade of Yankees…unacquainted with localicies, become separated from the rest of the troops…They wandered around for sometime in the hopes of meeting with their comrades…Suddenly…they came out upon a railroad…set to work upon it in a trice & enthusiastically tore up about a mile and a half of it…The Yankees had torn up a mile and a half of Grant’s new railroad just laid down from the vicinity of Petersburg to City Point.” With more (see photos).
The front page has a number of reports concerning the Civil War with datelines from Richmond, Mobile, Raleigh and Petersburg. The ftpg. also has a listing of the: “Confederate State Government, located at Richmond, Va.” Beginning with: “Hon. Jeff. Davis, of Miss., President…” plus the other officers (see photos).
Complete as a single sheet newspaper various water stains & foxing but causing no loss of readability, otherwise in nice condition.