Home > Back to Search Results > Confederate newspaper from Columbia...
Click image to enlarge 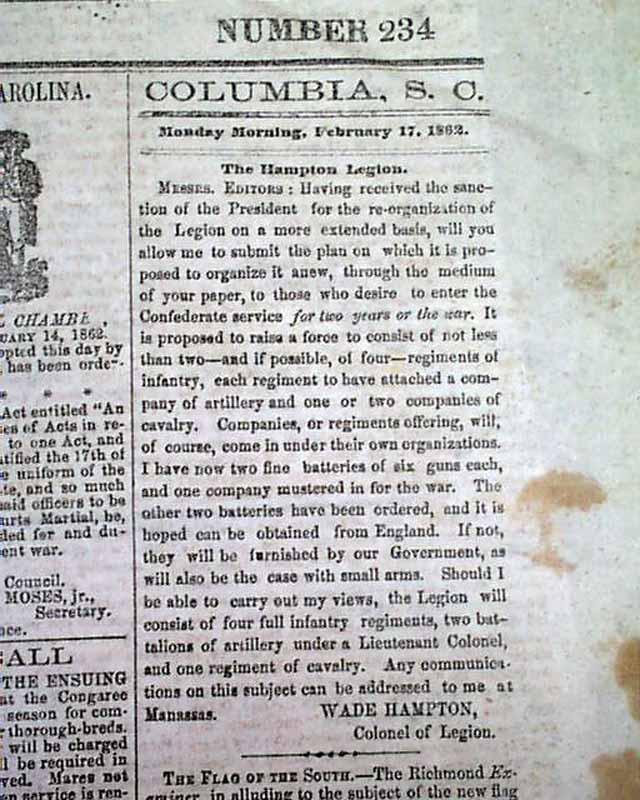 The front page is mostly taken up with ads but does has most of the last column filled war war-related items, headed with: "The Hampton Legion" which concerns the reorganization of it, signed in type: Wade Hampton, Colonel of Legion. Also on the ftpg: "The Flag of the South" which is interesting (see photos); Important War Rumors" "From Decatur" "Parson Brownlow" "Blockades & Barricades" and more.
The back page is almost entirely taken up with news reports including: "Abe's Cogitations" which is a poem; "Washington Items" "Peace & Independence" "The Fate of Fort Pulaski" "Gen. Beauregard" "European Intervention" "Yankee Small Boats in the River" "The Enemy in North Carolina" "The Battle at Fort Donelson" "Threatening Aspect of Things in East Tennessee" and more.
Complete as a single sheet newspaper of folio size, never bound nor trimmed, one small tape mend to a margin on the ftpg., very nice condition. A very rare title from the Confederacy.