Home > Back to Search Results > Great issue on the conflicts between England & the colonies...
Click image to enlarge 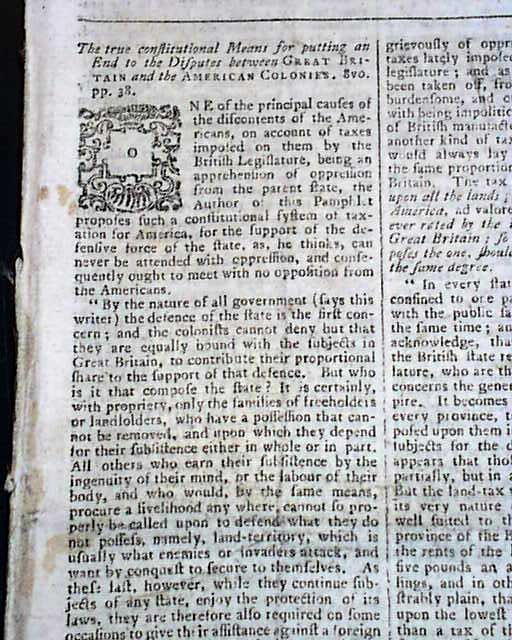 Great issue on the conflicts between England & the colonies...

Most of the ftpg. is taken up with: "The True Constitutional Means for Putting an End to the Disputes Between Great Britain and the American Colonists" which is a review of a pamphlet by this title. It begins: "One of the principal causes of the discontents of the Americans, on account of taxes imposed on them by the British Legislature, being an apprehension of oppression from the parent state..." with much more on defending the taxing of  the American colonies.
Most of page 2 is taken up with a great letter from Selectmen of Boston (including John Hancock) to the governor, with the governor's response, and the Selectmen's response to it, and the governors subsequent response. The letter begins: "At a time when artful & mischievous men have so far prevailed as to foment & spread divisions in the British Empire; when mutual confidence which hd so long subsisted in Britain & America is in a great measure broken; when means are at length found even to excite the resentment of the Mother state against her colonies; and they are publickly charged with being in a state of disobedience to law..." with much more.
Page 6 has news from New York with one bit noting from Phila.: "...The merchants are about signing articles not to import any more English goods after the date hereof, and there is no doubt of their abiding by them."
Eight pages, 8 1/2 by 11 1/4 inches, nice condition.