Home > Back to Search Results > Causes & Necessity For Taking Up Arms...
Click image to enlarge 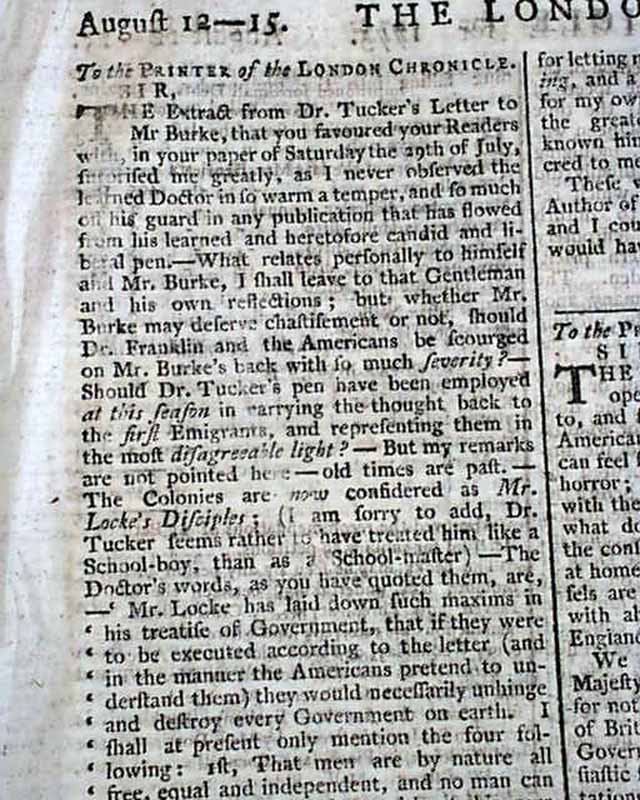 An inside page has a letter which makes reference to Ben Franklin and the American situation, including: "...but whether Mr.Burke may deserve chastisement or not should  Dr. Franklin & the Americans be scourged on Mr. Burke's back with so much severity?...I shall at present only mention the four following: 1st, That men are by nature all free, equal and independent & no man can be put out of this estate without his own consent..." with more (see for portions).
There is more American content further on including reports from Charleston with: "...the Governor has frequently expressed his concern at the present unhappy disputes between our Mother Country and her Colonies..." and: "...brought some newspapers, in one of which is a letter from Boston giving a very particular account of the last action & declaring that so many of the wounded had died since."
The back page has some nice content with reports from "Congress at Philadelphia, July 4, 1775" which references the two Restraining Acts of Parliament against the Americans with: "...are unconstitutional, oppressive and cruel & that the commercial opposition of the colonies to certain acts enumerated in the association of the last Congress ought to made against these until they are repealed." signed in type: Charles Thomson.
But what follows this is by far the most significant piece in this issue, nothing less than an extract from the famed document: "The Causes and Necessity for Taking Up Arms" which was the document from Congress which stated their case for being in open rebellion with England and in which is printed one of the more famous quotes in all of American history: "...with one mind resolved to die freemen rather than live slaves..." (see below).
There is a prefacing paragraph which introduces the document, noting: "The Congress have published a declaration, dated the 6th of July, entitled, 'The Declaration of the Representatives of the United Colonies of North American now met in General Congress at Philadelphia, which runs as follows:..." and what follows is an extract of the document, signed in type: John Hancock, President. The document includes in part: "...we most sincerely...declare, that the arms we have been compelled by our enemies to take up we will in defiance of every hazard, with unabating firmness...employ for the preservation of our liberties, being with one mind resolved to die free men rather than live slaves; we have not raised armies with ambitious designs of separating from Great Britain, & establishing independent states; we fight not for glory or for conquest, the arms we have now taken up we shall lay down when hostilities shall cease on the part of the aggressors, & all danger of their being renewed shall be removed, and not before."
This report is followed by more American content (see photos). Complete in 8 pages, 8 1/2 by 11 1/2 inches, with some very lite rubbing on the front page, otherwise is in very good condition.