Home > Back to Search Results > To John Hancock on the Stamp Act... Map of Bridgetown in Barbadoes...
Click image to enlarge 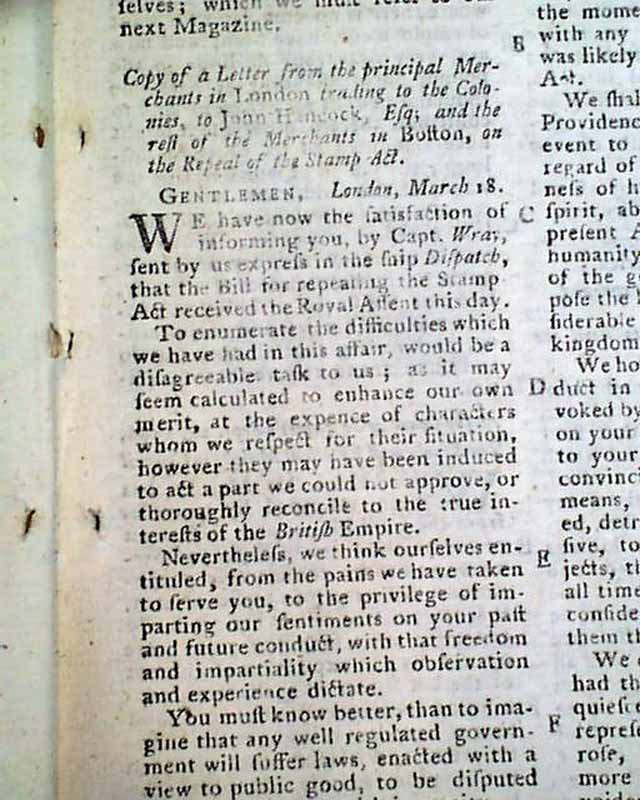 To John Hancock on the Stamp Act... Map of Bridgetown in Barbadoes...

Item # 644736 THE GENTLEMAN'S MAGAZINE, London, September, 1766  One of the better items is a letter: "...from the Principal Merchants in London trading to the Colonies, to John Hancock, Esq., and the rest of the Merchants in Boston, on the Repeal of the Stamp Act" which has some great reading. This letter takes a full page (see for most).
Other articles within include: "An Account of a white Negroe Boy" "Remarkable Petition to Oliver Cromwell" "Behaviour of a Young Heretic executed at Abbeville" and more.
Three-quarters of a column is headed "American News" with reports of troubles with Indians, etc. (see)
All three plates called for are present, the prime print being a full page map titled: "A Plan of Bridge Town in the Island of Barbadoes" which is very nice (see). There is a related article for this print as well. All three prints are in nice condition with some foxing at one of their margins.
Complete in 52 pages, 5 1/2 by 8 3/4 inches with untrimmed margins, full title/contents page featuring an engraving of St. John's Gate, great condition.