Home > Back to Search Results > Much on George Whitefield... Methodism... Map of Western Europe (portions)... Judaica...
Click image to enlarge 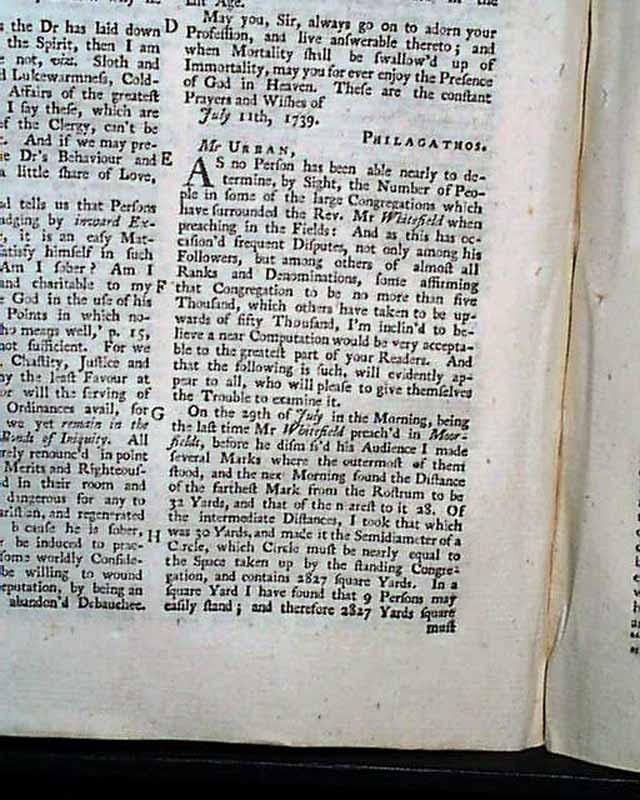 One of the articles is titled: "A Dissertation Whether the Hebrews borrow'd any Customs from the Heathens? And Whether Temples were before the Tabernacle?" which takes most of a column.

Several pages contain articles related to Reverend George Whitefield, including: "Mr. Whitefield charg'd with Falsities", "The Number of Mr. Whitefield's Hearers Calculated", and "Mr. Whitefield Vindicated.", one of which includes a reference to Methodism and John Wesley.

There is a full page taken up with a map and text concerning Spain, showing most of the country including Gibraltar, as well as a portion of northern Africa, the Brittany portion of France, the western portion of England, and the southern part of Ireland (see photos). There is a small inked library stamp at the bottom corner of this page.

Among the other articles noted in the table of contents are: "Continuation of the Vision of the unmarrying Priest" "Case of a Woman Unhappily Wedded" and more. Near the back is a section headed: "Historical Chronicle" with news from England & other parts of Europe.

Complete in 54 pgs. with full title/index page which contains an engraving of St. John's Gate. Measures about 5 3/4 by 8 3/4 inches, very nice condition.