Home > Back to Search Results > Reflecting on the Revolutionary War... Cornwallis writes...
Click image to enlarge 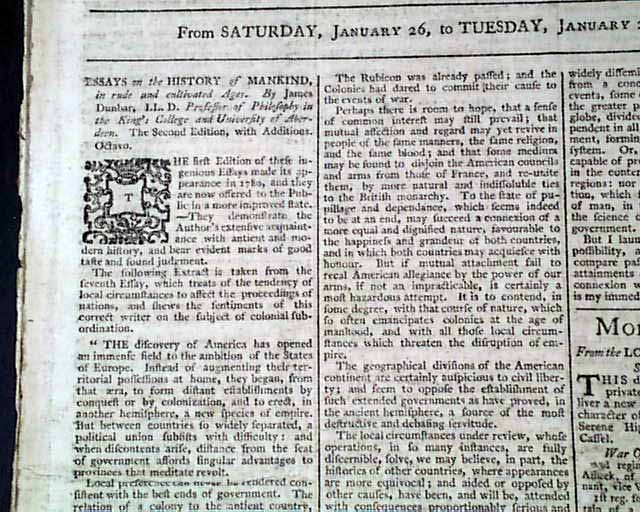 Most of the ftpg. is taken up with an essay which explores this history of England's relationship with the American colonies, and what led to war. One bit mentions: "...The Rubicon was already passed; and the Colonies had dared to commit their cause to the events of war. Perhaps there is room to hope that a sense of common interest may still prevail...".
Pg. 2 has a letter from Phila. mentioning the capture of flags taken from Cornwallis's army, & presented at the State House. Also a letter to the People of Exeter, England, from Cornwallis noting: "...The severe blow which the British arms have sustained in America, & which has so unfortunately fallen on my head..." (see).  Page 5 has a full column of: "American News" which includes news from New York & Charleston, and also has: "A List of Vessels Taken & Destroyed at York, in Virginia" which carries over to pg. 6.
Eight pages, 8 1/4 by 11 1/4 inches, good condition.