Home > Back to Search Results > The capture of Quebec...
Click image to enlarge 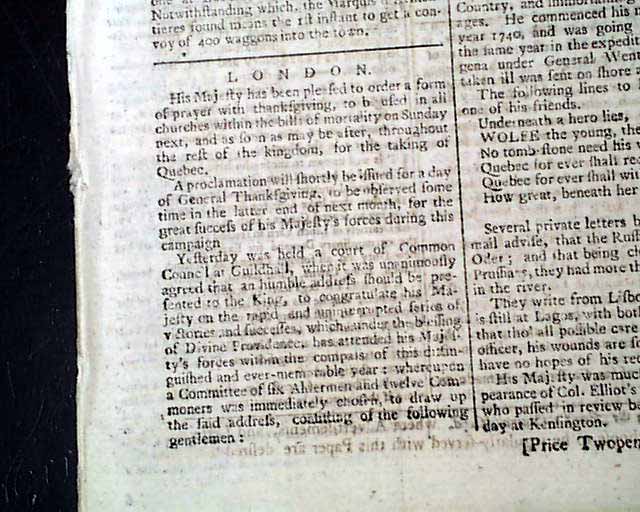 The capture of Quebec...

Page 6 has the: "Abridgment of the Placart Published by Gen. Wolfe...on His Arrival in the River St. Lawrence, 1759" containing in part: "The King justly exasperated against France, has set on foot a considerable armament by land and sea, to bring down the naughtiness of that Crown... The Canadians cannot be ignorant of their situation... The utmost exertion of their valour will be entirely useless, and will only serve to deprive them of their advantages that they might enjoy by their neutrality... they will only have their own selves to blame when they shall groan under the weight of that misery to which they will expose themselves...General Monckton died of the wound he received in the battle with the French before Quebec a few days after the said action action...In a few Days after, Gloriously fulfilled his Promise by the Conquest of QUEBEC, At the Expence of his Life." (see for full text)
The front page reports the capture of Quebec and the death of General Wolfe, with yet another mention found on the back page.
Eight pages, 8 1/4 by 11 inches, nice condition.