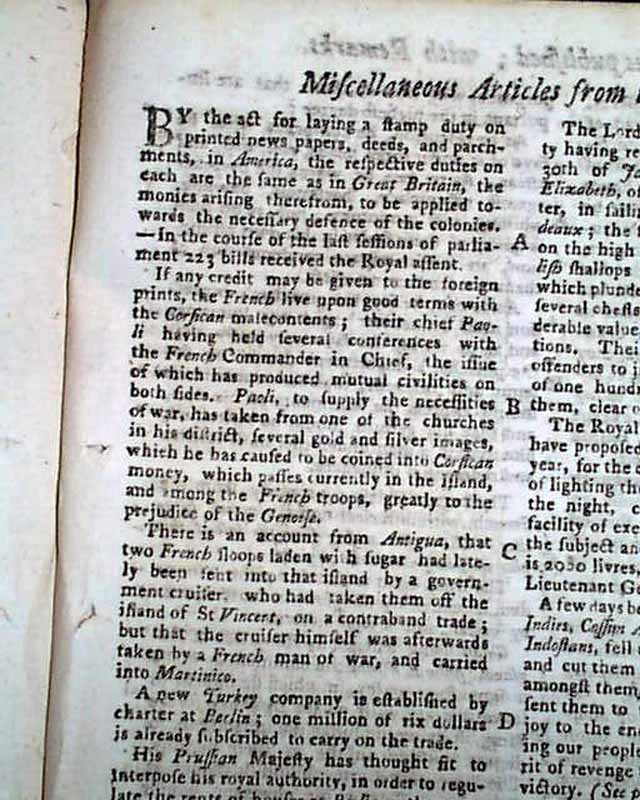 Item # 644386 THE GENTLEMAN'S MAGAZINE, London, June, 1765
Certainly the most notable content is the report: "By the act for laying a stamp duty on printed news papers, deeds, and parchments in America, the respective duties on each are the same as in Great Britain, the monies arising therefrom to be applied towards the necessary defense of the colonies." which was the British justification of the hated  Stamp Act (see).
Other articles in this issue include: "The Fish Act: Effects of it" "Letter of Queen Christiana of Sweden" "Description of the Field and Mole Crickets" "Winkleman's Account of Herculaneum" "Description of a Wheel Barometer" which is accompanied by a full page plate of it (see); "Address from the French Inhabitants of Grenada" & much more.
Near the back is the "Historical Chronicle" which has the latest news reports of the day.
Both full page plates called for are present, one noted above, and the other being: "A View of the Chapel at Market Harborough" (see).
Complete in 52 pages, 5 by 8 1/4 inches, full title/contents page with an engraving of St. John's Gate, very nice condition.
A nice issue of this very famous & successful British magazine from this significant year of the Stamp Act, and some ten years before the outbreak of the Revolutionary War.