Home > Back to Search Results > The Battle of Dettington... Very early (1743) regarding cricket...
Click image to enlarge 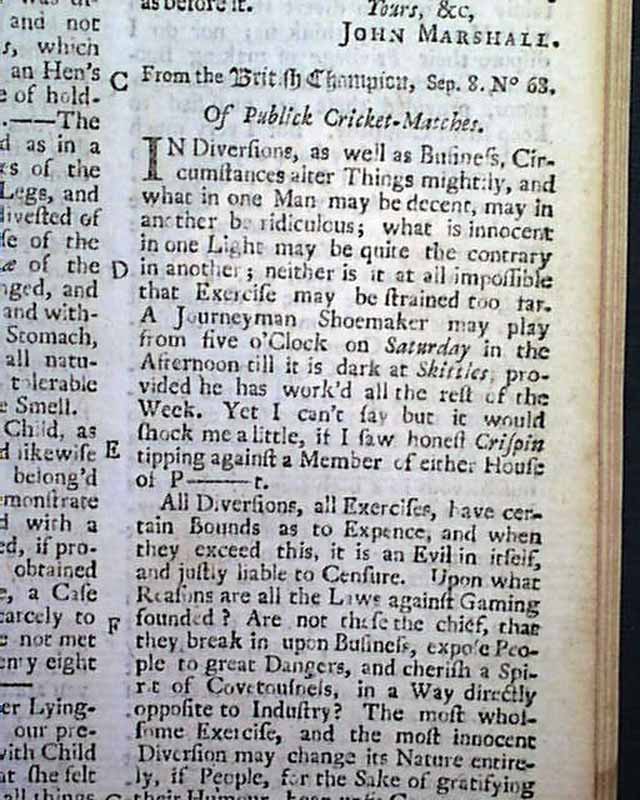 Within this issue is a very early and interesting article titled: "Of Publick Cricket Matches" concerning the sport of cricket, with much detail (see). The text includes: "Cricket is certainly a very innocent & wholesome exercise, yet it may be abused if either great or little people make it their business. It is grossly abused when it is made the subject of publick advertisements to draw together great crowds of people who ought all of them to be somewhere else..." with much more. This article takes about 1 3/4 columns.

Among other articles in this issue are: "The Path of the Moon, Demonstrated" includes 2 little engravings; "An Explication of Matthew XXVII..." from the Bible; "An Extraordinary Case of a Fetus 13 Years in the Body of a Woman" and nearly a full pg. has a sheet of music among other items. There is much reporting on events in Parliament under the guise of: "Proceedings & Debates in the Senate of Lilliput" as direct reporting on Parliamentary events was prohibited. Near the back is a section headed: "Historical Chronicle" with news from England & other parts of Europe, including: "Extract of a Letter from Jamaica" and another letter from Barbadoes.

Complete in 54 pgs. with full title/index page which contains an engraving of St. John's Gate. Measures about 5 by 8 inches, minor dampstaining, overall quite nice. There are no maps or plates called for in this issue.