Home > Back to Search Results > The British destroy Washington, D.C. in the War of 1812...
Click image to enlarge 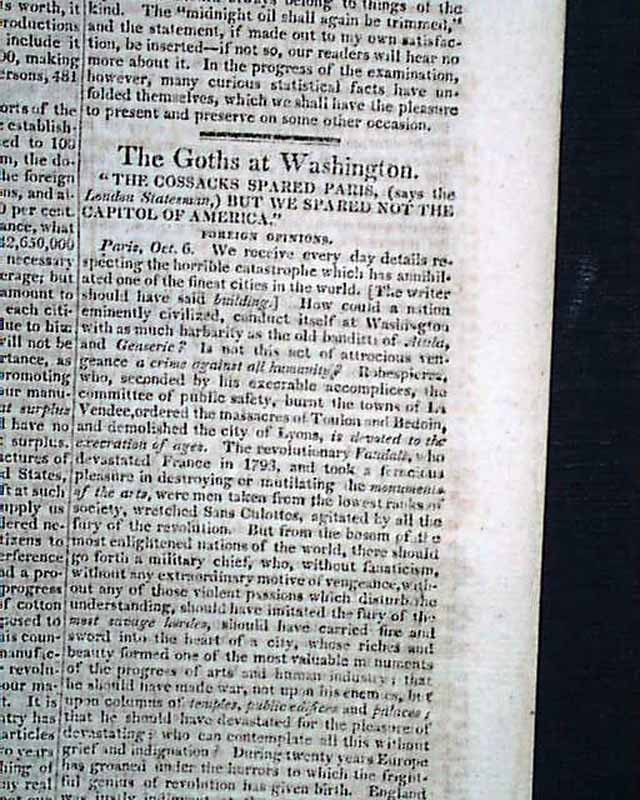 NILES' WEEKLY REGISTER, Baltimore, December 31, 1814  Certainly the prime content of this issue is the detailed page 3-6 coverage of the British attack on Washington, D.C., one article headed: "The Goths at Washington" with the report from Paris telling of the destruction of the many fine buildings in the nation's capital (see photos for portions).
Further on is another article headed: "The Attack on Washington" with the report taken from the "London Gazette Extraordinary" and going into considerable detail on the ravage of the federal capital by the British forces in the War of 1812 (see photos for portions). This report concludes with a detailed listing of the "Return of killed, wounded and missing of the troops..." and other details (see for portions).
Additionally, the inside pages have a great deal of coverage of the War of 1812 including a column headed: "Events of the War" which takes nearly 7 pages of text, and includes a: "Copy of a Letter from Major General Andrew Jackson to the Governor of Tennessee" which is signed by him in type: Andrew Jackson.
Sixteen pages, 6 by 9 3/4 inches, in good condition.